From March 13, the Peggy Guggenheim Collection’s galleries, adjacent to the exhibition Postwar. Italian Protagonists (February 23 – April 15 2013) curated by Luca Massimo Barbero and dedicated to five major figures of Italian art after World War II, host Gianni Mattioli Collection. Early 20th Century Italian Art. In addition to the celebrated Mattioli Collection, which has been on deposit at the Peggy Guggenheim Collection since 1997, the exhibition presents numerous other works by Italian artists of the early 20th century. It amounts to a historic prologue and setting for the postwar avant-garde art exhibited nearby. Major works of Italian Futurism and Metaphysical painting testify to the vitality of Italian art in the second decade of the 20th century. 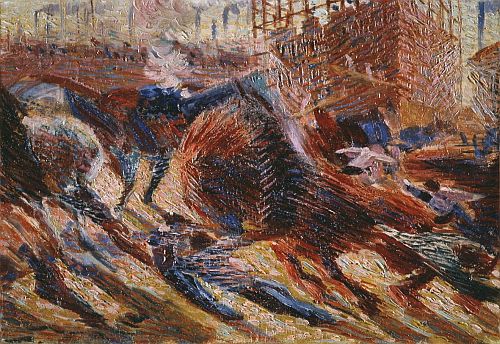 The exhibition, installed by Philip Rylands, director of the Venice museum, opens with an Ecce Puer (1906 c.) in wax by Medardo Rosso, paintings by the young Giorgio Morandi, including his homage to Cézanne, Fragment (1914) and his first masterpiece Bottle and Fruitbowl (1916), and a Parisian portrait by Amedeo Modigliani, Portrait of the painter Frank Haviland (1914). Metaphysical painting follows, with canvases by Giorgio de Chirico, including The Red Tower (1913), the young artist’s first sale, Carlo Carrà, and several works by Mario Sironi, such as his Cyclist (1916), a key work in the artist’s early career donated by Giovanni and Lilian Pandini to the Solomon R. Guggenheim Foundation, and one of his much admired Urban Landscapes (1921). Following this comes the Futurist explosion, with renowned masterpieces such as Materia (1912) and Dynamism of a Cyclist (1913) by Umberto Boccioni, Mercury passing before the Sun (1914) by Giacomo Balla, Interventionist Demonstration (1914) by Carlo Carrà, Blue Dancer (1912) by Gino Severini, as well as Severini’s Sea=Dancer (1912) in the Peggy Guggenheim Collection. No fewer than three of Boccioni’s known sculptures are on view Dynamism of a Speeding Horse + Houses (1915), Unique Forms of Continuity in Space (1913) and Development of a Bottle in Space (1913), in addition to pre-futurist works by Boccioni such as Field near Padua (1903) e Contre-jour (1910), both in private collections.

Marinetti’s polemical founding manifesto of Futurism in 1909, which concluded with the proclamation “Erect on the summit of the world, once again we hurl defiance to the stars”, was at first intended as a literary movement (“Courage, audacity, and revolt will be essential elements of our poetry”), but at the same time was an incitement, through a total break with tradition, to a radical renewal of all aspects of Italian culture, praising speed, dynamism, and new technology. The following year, February 11 and April 11, 1910, five artists signed, on two separate occasions., the Manifesto of the Futurist Painters: Balla, Boccioni, Carrà, Russolo and Severini—all of them represented with major works in the Mattioli Collection, and in the new installation now on view at the Peggy Guggenheim Collection.

Christophe Coppens Hermann Nitsch – The senses and being