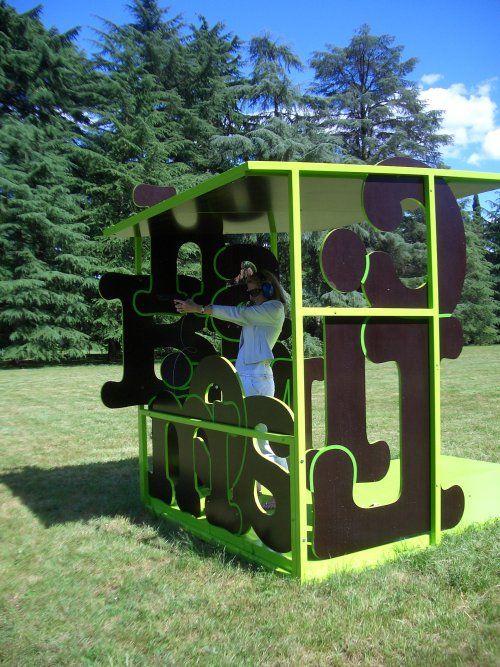 On display on the gallery’s groundfloor are various groups of works: among them are the room-sized lamp installation “The great Disarray Swindle” (2009), a big binary clock with several images of Michael Jackson, two cuckoo clocks that reproduce the typical scream of the King op Pop, a number of glass boxes containing various digital prints and “C’il Eam Habbim” (2005), a shooting range that has been shown in the gardens of Villa Manin in 2005.

The over-all theme of the show is the iconic figure of Michael Jackson. In recycling a contemporary icon such as Michael Jackson, Rehberger’s approach is not that of a pop artist who is romanticizing about his idol, he much rather recognizes the variety of forms the icon can represent and the cultural implications they evoke: in the large binary clock the huge transformation Jackson underwent from his cute beginnings with the Jackson Fives to his rather scary and otherworldly appearance he took on later in his carreer becomes apparent.
In the shooting range the hybrid figure of the two popular icons Bambi and Jackson is transformed into a moving target the viewer can aim at. Both the helpless animal and the childlike rockstar confront us with their innocence and impose a sense of collective guilt onto the viewer while they are at the same time vividly demonstrating the interrelation of violence and entertainment.
The third variation of the theme can especially be seen in the glass boxes where Rehberger focuses on and plays with the hour of Michael Jackson’s death: 12:26.
Many of the exhibited works, are, in fact, references to time: both the big binary clock and the glass boxes that all deal in one way or the other with the hour of Jackson’s death function as a memento. It is the omnipresent theme of transience that is captured in the show and although Michael Jackson’s image is everywhere the viewer is continuously reminded of his death.

The only work beyond the Michael Jackson context is “The Great Disarray Swindle”, a vast installation consisting of various lamps and a huge tangle of cables that looks like a myriad of cobwebs. Big lamp installations are a reoccuring motif in the works of Tobias Rehberger. It is a testing ground where the artist can experiment with different materials, colours and forms and where he can show that the most functional objects can have not only an aesthetic but also and intellectual value.

In 2009, Tobias Rehberger was commissioned to design the cafeteria for the 53rd Venice Biennial “Making Worlds” (curated by Daniel Birnbaum). For his project “Was du liebst, bringt dich auch zum Weinen” he won the Golden Lion for Best Artist.