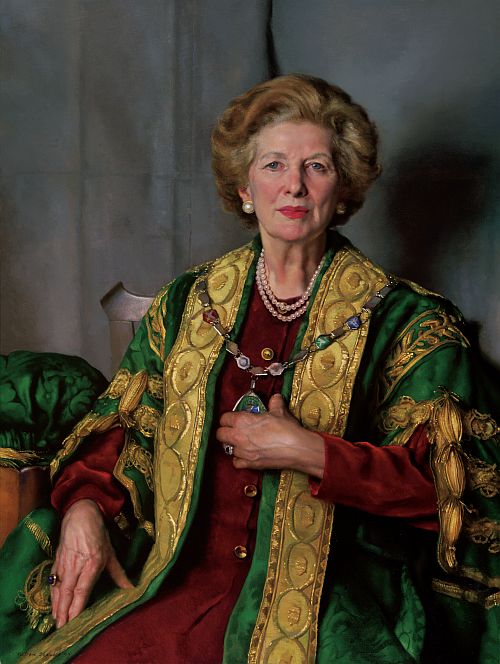 The Michener Art Museum will be exhibiting the paintings of Nelson Shanks June 8 through September 8, 2013 in the Putman Smith Gallery. Nelson Shanks: A Brush with Reality brings together more than 20 major paintings from public and private collections around the country and from the artist’s personal collection.

Shanks has an international reputation for portraits of such figures as Presidents William Jefferson Clinton and Ronald Reagan; Diana, Princess of Wales; Pope John Paul II; Luciano Pavarotti; and former British Prime Minister Margaret Thatcher. Three are in the collection of the National Portrait Gallery.

“Nelson Shanks is a maestro, orchestrating colors, spaces and elements like a conductor,” says Michener Art Museum Director & CEO Lisa Tremper Hanover. “And just as a conductor teases nuances from his musicians, Shanks infuses his paintings with this same passion and energy.”

The world-renowned painter, teacher and art historian has been influential in the revival of classical realism in the United States. Shanks’ focus on and dedication to classical painting is rooted in the European masters. His portrait compositions are narratives that speak to the scope and scale of a personality. His studies of human nature, most often in the form of the female nude, are rich with references – a floral headpiece, delicate compote, gilded frame remnants, a peacock feather, and soft textiles.

Shanks grew up in a home where art was appreciated. His mother played piano, and when his sister studied drawing, young Nelson learned vicariously. He made his first painting when he was 5 years old, and at age 12 earned a scholarship to the Delaware Art Center (now the Delaware Art Museum). He studied architectural engineering, then moved to New York to study at the National Academy of Design and the Art Students League.

Shanks has lived, taught, and painted in Bucks County since the 1960s – he says it’s the landscape he knows best – and is recognized for his eloquent portraits of notable figures in the world of politics, science, the arts, and religion. Yet there is enormous range in his oeuvre which includes still lifes, landscapes, and human tableaus filled with dramatic colors and textures.

While painting, Shanks would carry on conversations with his subjects, discussing how to solve world problems. “Margaret Thatcher was one of the persons with whom I have had one of the deeper philosophic kinds of conversations,” he told Tremper Hanover during a recent conversation. “She called me a philosopher, not just a painter but a philosopher.”

Education, observation, and practice are at the root of his success. Shanks, with his wife Leona, founded Studio Incamminati in Philadelphia in 2002. Dedicated to immersing students in the process and content of painting humanist realism, the studio is recognized for its superb faculty, teaching spaces, and curriculum.