Will Maclean at The Fleming Collection (London) 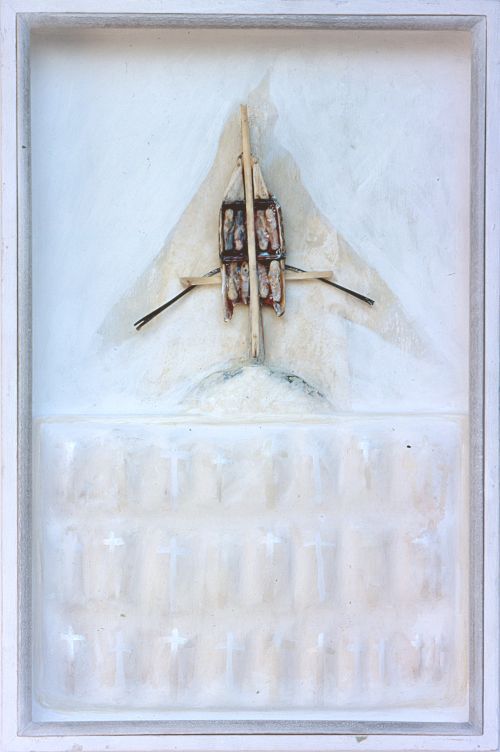 Maclean is internationally recognised as a foremost exponent of box construction art, using found objects which he deconstructs and reconstructs in a display of visual thinking that is compelling. He has developed a unique visual and poetic language and his metaphorical art is based on the histories and mythologies of those who live and work by the sea. His deep interest in the culture of the Scottish Highlands reaches out to universal themes of navigation, emigration, fishing and global exploration.
There is a strong narrative contained in these powerful works of art, which challenge the viewer through an informed reflection on history and culture.

Maclean was born in 1941 in Inverness, the son of a harbourmaster. He originally planned to follow his father’s maritime career but after two years training, some of it spent at sea, he was forced ashore when he failed an eye test. Changing track, he studied at Gray’s School of Art in Aberdeen from 1961 to 1965 and then won a travelling scholarship that enabled him to visit France, Italy and Greece. During this period he stayed for three months at the British School in Rome, where he developed an interest in archaeology which is reflected in his art. He returned to the sea as a fisherman for a brief period in 1968 and this led to a major bursary in 1973 to study ring-net herring fishing. The 400 drawings that resulted were exhibited in Glasgow and later became part of the permanent collection at the Scottish National Gallery of
Modern Art in Edinburgh.

Maclean has had a long and distinguished academic career. Appointed a lecturer at the Duncan of Jordanstone College of Art and Design at the University of Dundee in 1981, he remained there for 15 fruitful years. In 1994 he became Professor of Fine Art and from 2004 to 2006 was Senior Research Fellow. He is now Emeritus Professor at the College. He was elected as a Royal Scottish Academician in 1991 and eight years later was awarded an Honorary Doctorate by the University of St Andrews. He received an MBE for services to education and the arts in 2005 and lives and works in
Tayport, Fife with his wife, the artist Marian Leven.

Maclean has exhibited widely both in Britain and internationally. In 1999 his exhibition Cardinal Points toured in the United States and Canada and group shows have included Worlds in a Box at Edinburgh City Art Centre and Whitechapel Art Gallery in London, and Contemporary British Art in Print at the Scottish National Gallery of Modern Art in Edinburgh. A major work was acquired for the new Scottish Parliament building and commissioned sculptures and collaborative works can be seen in Skye, Lewis and elsewhere in Scotland.

The show at The Fleming Collection will include loans from private and public collections. The latter will include Aberdeen Art Gallery, the Fitzwilliam Museum in Cambridge, the Scottish National Gallery of Modern Art, the McManus Galleries, Dundee and Inverness Museum and Art Gallery. Five works from The Fleming Collection’s own holdings, including Red Ley Marker, Ephemeris and Toolbox Fisher Shaman will be in the exhibition, which will also feature new work and archival material from the artist.

Will Maclean: Collected Works 1970-2010, published by The Fleming-Wyfold Art Foundation to coincide with the exhibition, will include a foreword by the art historian and critic Professor Duncan Macmillan and essays by Professor Murdo McDonald,
Professor of History of Scottish Art at the University of Dundee, and the artist Sandy Moffat, renowned for his portraits of modern Scottish poets.