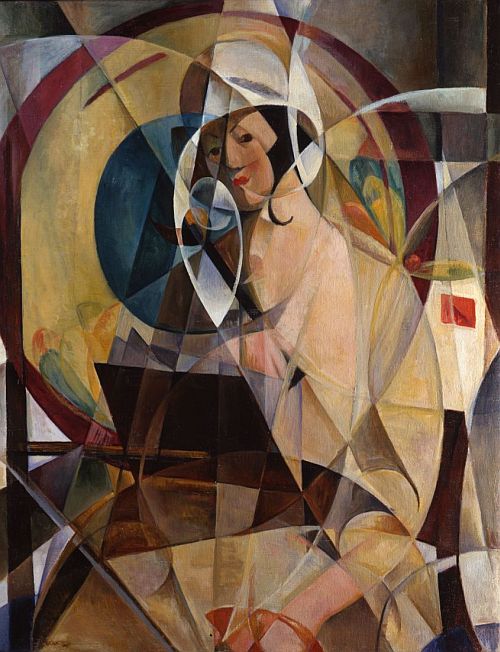 An exhibition exploring the early decades of Cubism and featuring the work of such celebrated Cubist artists as Albert Gleizes, Evie Hone and Mainie Jellett, opens to the public in the New Galleries at the Irish Museum of Modern Art in Kilmainham, Dublin, on Wednesday 20 February 2013. Analysing Cubism focuses especially on the Continental milieu in which Hone, Jellett and other Irish artists worked in the 1920s and ‘30s, learning from and contributing to the development of European Modernism. The exhibition will be opened by the Minister for Arts, Heritage and the Gaeltacht, Jimmy Deenihan, TD, at 6.30pm on Tuesday 19 February. The exhibition is a partnership between the Crawford Art Gallery, Cork, and IMMA and includes major loans from the National Gallery of Ireland, and is presented within the context of the Sharing Services initiative being promoted by the Department of Arts, Heritage and the Gaeltacht. The exhibition is a collaboration with the F.E. McWilliam Gallery and Studio, Banbridge, Co Down. The exhibition is part of the programme of visual arts events celebrating Ireland’s Presidency of the European Union and is supported by the Department of Arts, Heritage and the Gaeltacht, the French Embassy in Ireland and The Irish Times.

Analysing Cubism takes its title from the early years of the movement, sometimes referred to as ‘Analytical Cubism’. However, the exhibition extends its scope to the end of the Second World War, a watershed in modern art when the focus shifted from Paris to New York. It looks at the work of a number of pioneering Irish artists who travelled to France and further afield to study modern art. The exhibition seeks to place these artists in context, examining the influence of their teachers, as well as exploring the work of some of the leading international exponents of Cubism.

The exhibition focuses on the Irish artists May Guinness, Jack Hanlon, Evie Hone, Mainie Jellett, Norah McGuinness and Mary Swanzy, and on their English counterparts Paul Egestorff and Elizabeth Rivers. It also includes work by European painters such as Georges Braque, Albert Gleizes, Juan Gris, Henri Hayden, André Lhote and Pablo Picasso. The largest concentration of work in the exhibition is by Gleizes, Hone, Lhote and Jellett – in recognition of the extensive influence that these artists had on modern Irish abstract painting.

The influence of André Lhote is evident through his many pupils; these included May Guinness, Jack Hanlon, Evie Hone, Mainie Jellett, Norah McGuinness and Elizabeth Rivers. These artists travelled to Paris, seeking to discover abstraction and new forms of expression, each artist interpreting these influences in their own unique style. Mainie Jellett, was perhaps the most influential of her generation, through her own painting, her founding of the Irish Exhibition of Living Art and her work as a teacher, promoting Modernism in a country firmly committed to the academic tradition of the Royal Hibernian Academy. Evie Hone was Jellett’s dearest friend and intellectual partner, and the two travelled extensively in each other’s company. Mary Swanzy, like Jellett and Hone was first trained in Paris, but also travelled to Italy and later to Samoa in the South Seas – following in the footsteps of Paul Gauguin, where the colours and forms of the tropics dominated her practice.

Analysing Cubism was first proposed by Peter Murray, Director of the Crawford Art Gallery in Cork, commenting on the exhibition he said: “Analysing Cubism provides an opportunity to revisit a period in the first half of the twentieth century when Irish artists studied and worked on the Continent, learning, but also contributing to the development of European Modernism. The exhibition is significant on many levels. Not only does it make a contribution to the growing appreciation of the Modern Movement in 20th century Irish art, it also raises questions relevant to today’s art world, regarding the relationship of centre and periphery, and of the sometimes under acknowledged contribution made by young creative talents to the development of the art of their time.”

The exhibition has been planned and developed within the context of the Department of Arts, Heritage and the Gaeltacht’s Shared Services initiative, an innovation that will bring the Crawford Art Gallery Cork, the National Gallery of Ireland and IMMA into closer co-operation in the coming years. The exhibition is curated by Seán Kissane, Curator of Exhibitions at IMMA and Dr Riann Coulter, art historian and Curator of the F.E. McWilliam Gallery and Studio. Anne Boddaert at the Crawford Art Gallery and Seán Kissane have organised the exhibition and are co-editors of the exhibition catalogue.