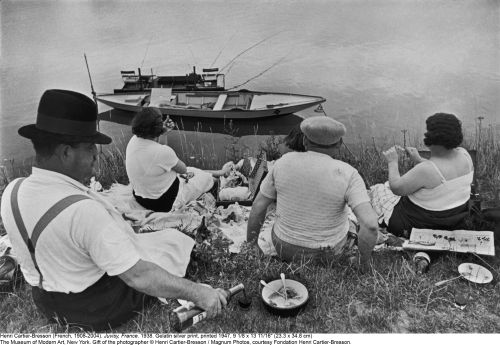 The High Museum of Art will host “Henri Cartier-Bresson: The Modern Century,” the first major retrospective in the U.S. in more than 30 years of one of photography’s most original and influential masters. On view from February 19 through May 29, 2011, the exhibition comprises more than 250 photographs dating from 1929 to 1989—at least one-fifth of which are previously unknown to the public—and focuses on the photographer’s most productive decades, the 1930s through the 1960s. Also included is a generous selection of original issues of Life, Paris Match and other magazines in which many of the photographs first appeared.

Cartier-Bresson’s uncanny talent for seizing lasting images from the flux of experience, long identified with the title of his book “The Decisive Moment” (1952), made him a leading figure both in photography’s experimental modernism of the 1930s and the very different realm of photojournalism after World War II. “Henri Cartier-Bresson: The Modern Century” offers a fresh overview of that complex achievement by drawing upon a great deal of previously inaccessible information and images from the Henri Cartier-Bresson Foundation in Paris, which was established in 2002, two years before the photographer’s death at the age of 95, and which has generously lent 220 prints to the exhibition.

“Henri Cartier-Bresson: The Modern Century” is organized by Peter Galassi, Chief Curator, Department of Photography, The Museum of Modern Art, where it is on through June 28, 2010. The exhibition will then travel to the Art Institute of Chicago (July 24–October 3, 2010), the San Francisco Museum of Modern Art (November 6, 2010–January 30, 2011) and the High Museum of Art, Atlanta (February 19–May 29, 2011).

“This landmark exhibition includes a wonderful mix of iconic and unknown images from the full breadth of Cartier-Bresson’s illustrious career,” said Julian Cox, curator of photography at the High Museum of Art. “One of photography’s greatest talents, Cartier-Bresson ceaselessly explored the world around him with his camera and seamlessly combined professional assignments with work he made purely for pleasure. This exhibition is not to be missed.”

“Henri Cartier-Bresson: The Modern Century” is organized into 13 sections, beginning with 34 prints drawn from Cartier-Bresson’s work of the early 1930s, when the young Surrealist rebel used the quickness and mobility of his handheld Leica camera to invent a new brand of creative magic. Several of his early pictures celebrate motion by freezing it, such as “Behind the Gare Saint-Lazare, Paris” (1932), in which a leaping man is forever fixed just before his heel touches the water that reflects his silhouette. Other pictures utterly transform reality, reinventing the life of the street as Surrealist theatre, more mysterious and compelling than the world we know. In “Valencia, Spain”(1933), for example, a boy gazes upward at a ball he has tossed; because the ball is out of the picture’s frame, the boy is transformed into a figure of rapture.

The prints that constitute the following section introduce Cartier-Bresson’s long career in photojournalism, focusing on the aftermath of World War II and profound political and social transformations in Asia, where he worked from 1947 to 1950. After the war, during which he spent nearly three years as a prisoner of the Nazis, Cartier-Bresson found in photojournalism a productive framework for his passionate engagement with the rapidly changing world. Instead of mystery and magic, he now sought clarity and completeness, forging a style that could sum up a story or situation by framing a small number of characters in a scene of stunning simplicity. In “Shanghai, China” (1948) the upheaval of the Chinese revolution is vividly evoked through the panic of a crowd desperate to retrieve gold from the bank before the city falls to the Communists. The accompanying display of magazines presents issues of Life, Paris Match and Illustrated, in which Cartier-Bresson’s Shanghai bank panic photographs appeared, along with his nine-page Life story on Beijing.

The remaining eleven sections are organized thematically rather than chronologically, with the third, fourth and fifth chapters exploring the photographer’s evocations of age-old patterns of life in Asia, throughout Europe and the West and in his native France. Born at a time when the automobile and the airplane were still in their infancy, Cartier-Bresson was deeply attached to social and cultural customs untouched by modern industry and commerce, and many of his best pictures could have been made hundreds of years prior, had photography existed. His alertness to concrete cultural particulars saves his work from the pitfalls of sentimental tourism as he traveled around the globe observing such scenes as a polite exchange between old friends on the street in Beijing (1948), two women and a child scrubbing the sidewalk in a Dutch town (Kampen, The Netherlands, 1956) and a fishmonger selling her wares at the market in the Rue Longue, Marseille (1954). Instead of untouched nature, his landscapes always evoke the presence of man, be it in the carefully tended rice paddies of Sumatra, Indonesia (1950), the undulating farmland of Castille, Spain (1953), or an avenue of plane trees in his native country (Brie, France, 1968).

The exhibition next turns to the new worlds of the United States and the Soviet Union. Cartier-Bresson photographed more extensively in the United States than in any other country except for his native France, but his American pictures are among his least well known. In principle, the clarity and balance of Cartier-Bresson’s postwar style went hand in hand with a posture of neutral observation. But his image of the United States incorporates a distinctly critical thread, alert to American vulgarity, greed and racism. Following the death of Josef Stalin in 1953, Cartier-Bresson was the first Western photographer to be admitted to the Soviet Union. The pictures he made in the summer of 1954 were news themselves, and were widely published in magazines. When he returned nearly two decades later in 1972 and 1973, he added a new dimension—grim, barren and bleak—to his images of Soviet life.

The photo-essay—a group of pictures about a single subject, usually accompanied by captions—was a staple of photojournalism throughout Cartier-Bresson’s career, and the next two sections of the exhibition feature two such essays in abbreviated form. In 1958 Cartier-Bresson undertook an ambitious campaign to photograph China’s “Great Leap Forward,” Mao Tse-tung’s intensive program of forced industrialization. Beginning in mid-June, he worked steadily for four months in China, and although he was closely monitored by the authorities, he returned with a very substantial body of work. Life’s version of the story (on view in this section) was typical of many other versions around the globe, for it devoted nearly half of its 17 pages to splashy color images at the expense of the quieter but more informative black-and-white photographs. Apart from a small paperback published in 1964, “China as seen by Henri Cartier-Bresson,” this exhibition is the first in-depth presentation of the black-and-white pictures.

The second photo-essay on view arose from a commission to illustrate the 1960 annual report of Bankers Trust Company in New York. At the time the informal, small-camera style of photography that had been popularized by the magazines began to appear regularly in the annual reports of American corporations, and the assignment granted Cartier-Bresson access to the inner workings of the bank, which would have been otherwise hard to penetrate. Neither Chinese communism nor American capitalism conformed to Cartier-Bresson’s idea of a just society; yet he carefully studied the specific activities of individuals, and described them patiently without resorting to rhetorical effect. Only the bosses are regarded with a skeptical eye.

The exhibition continues with a selection of 34 portraits that reveal Cartier-Bresson as one of the great portraitists of the twentieth century. Throughout his far-flung travels he was alert to every opportunity to add to his pantheon of notable people—mostly artists and writers—which eventually numbered nearly 1,000. He preferred to picture his sitters at home, and when asked how long the session would take, he liked to answer, “Longer than the dentist, but shorter than the psychoanalyst.” Sitters photographed in France just before and after World War II include Pierre Bonnard, Henri Matisse, Jean-Paul Sartre, Simone de Beauvoir and Albert Camus. Cartier-Bresson’s tour of the United States in 1947 yielded lasting portraits of William Faulkner and Truman Capote, among others. Later portraits that evoke a keen alertness to telling gestures include George Balanchine, New York City (1959), Louis Kahn, Philadelphia (1961), and Coco Chanel, Paris (1964).

A brief section of 10 photographs that feature Cartier-Bresson’s eye for beauty and his talent for transforming the most banal subjects into elegant images includes photographs made at The Museum of Modern Art and at an Easter Parade in Harlem, both in 1947. The subsequent section samples Cartier-Bresson’s sensitive observations of encounters and gatherings of all kinds in the lively theater of the street, beginning with simple groups such as two friends chatting beside a newsstand (Naples, Italy, 1960), a pair of French farmers in a heated argument (Mende, Lozère, France, 1968) and a young couple asleep on a train (Romania, 1975). A 1937 photograph of eccentric Londoners at the coronation of King George VI is drawn from one of Cartier-Bresson’s earliest assignments, during which he inaugurated a lifelong strategy of ignoring the main event to study the spectators. A horserace in Cairo in 1950, a football game in Michigan in 1960 and the inauguration of French President François Mitterand in 1981 are among other scenes to which he applied this strategy.

The exhibition concludes with a section devoted to Cartier-Bresson’s explorations of the often unlovely rise of modernity—mechanization, commerce, consumerism and leisure—around the globe. Despite his affection for preindustrial cultures, Cartier-Bresson did not shrink from observing the rapidly changing world, and as a consequence his work as a whole embodies a historical panorama as broad as the geographical range of his travels. Among the final images of the exhibition are scenes of contemporary relaxation (Country Club, Aguascalientes, Mexico, 1963), including a Club Med gathering in Corsica, France in 1963, a picnic in Japan during a reenactment of a Samurai scene (Nikko, Japan, 1965) and a rodeo in Los Angeles in 1960, at which an American cowboy—once the symbol of grit and pioneering independence—finds himself playing his guitar in a parking lot. The pictures suggest that comfort and convenience may have made things easier, but perhaps not better.