Toulouse-Lautrec and Friends at High Museum of Art (Atlanta)

Toulouse-Lautrec and Friends: The Stein Collection
High Museum of Art
January 29 – May 1, 2011 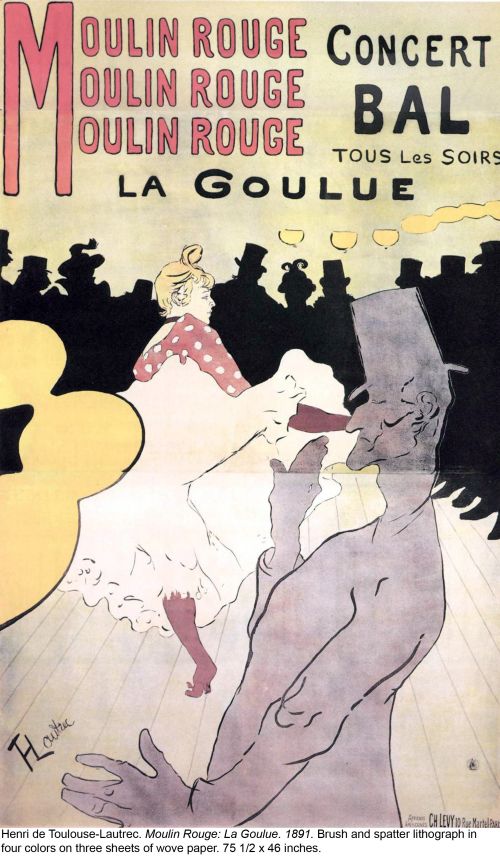 The High Museum of Art today announced a gift of 47 works of art, the majority of which are prints and posters by major artists working in fin-de-siécle Paris, from prominent Atlanta collectors Irene and Howard Stein. The Stein collection includes many rare and extremely prized works by Henri de Toulouse-Lautrec, such as “La Clownesse au Moulin Rouge” (1897), one of only a handful of impressions of this color lithograph, and “Miss Loïe Fuller” (1893), a ghostly image of the famous American dancer that incorporates powdered gold. The gift also includes important prints and drawings by Pierre Bonnard, Edgar Degas, Paul Gauguin, Honoré Daumier and Paul Signac, and sculptures by Pieter Xavery, Martin Desjardins, Charles Cordier and Jules Dalou. In celebration of this gift, the High will mount a special exhibition titled “Toulouse-Lautrec and Friends: The Stein Collection,” which will open in January 2011.

“This is one of the largest and most significant gifts of works of art in the history of the High Museum of Art,” said Michael Shapiro, the High’s Nancy and Holcombe T. Green, Jr. Director. “Over the past two decades, the Steins have been invaluable in helping us to build our collection. This latest gift will greatly strengthen our European sculpture collection and dramatically elevate our holdings of works on paper by Impressionists and Post-Impressionists.”

“Toulouse-Lautrec and Friends: The Stein Collection” will feature approximately 80 works. In addition to the 47 new gifts, the exhibition will include approximately 30 works that were either previously given to the High by the Steins or purchased with funds given by the Steins. Among these is a rare complete set of Toulouse-Lautrec’s lithographic masterpiece “The Elles Series” (1896), which the Steins presented to the High in 2001; the set is remarkable because it is unbroken and virtually in perfect condition. In 1998 the High organized “Toulouse-Lautrec: Posters and Prints from the Collection of Irene and Howard Stein,” which featured many of the works now in the High’s collection and those part of the new gift.

Both Irene and Howard Stein were born and raised in Brooklyn, New York, and are graduates of Brooklyn College. They relocated to Atlanta in the early 1970s to be closer to their carpet mill, and then retired in the early 1990s. Their art collecting began in the 1970s with the acquisition of fin-de-siècle posters by such artists as Mucha and Chéret. As their interest grew in this medium, they soon focused on the work of the premier artist of that period, Henri de Toulouse-Lautrec, and have assembled one of the best private collections of his work in the world.

The Steins have been members of the High Museum since 1976, and Howard is a life member of the museum’s board of trustees. “We bought Toulouse-Lautrec because we appreciated the medium and enjoyed the stories behind the images,” said Irene and Howard Stein. “We are very pleased to be able to share our passion for Toulouse-Lautrec with Atlanta and the world, and we hope that our gift to the High Museum will set an example for other collectors to do the same. For our part, this has been an exciting journey in building our collection, and we appreciate the expertise and friendship of David Brenneman. It has enriched our lives.”