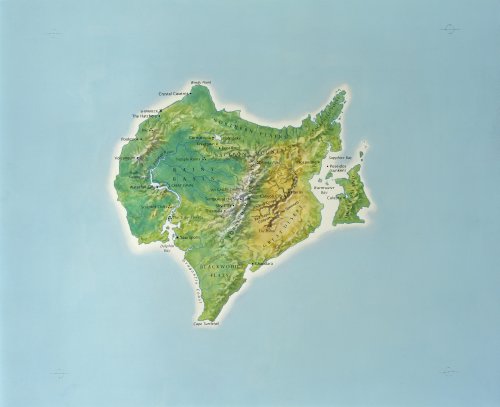 The Delaware Art Museum presents Dinotopia: The Fantastical Art of James Gurney, featuring more than 60 paintings and mixed media objects, on view February 6, 2010 – May 16, 2010. Inspired by archaeology, lost civilizations, and the art of illustration, Dinotopia is an extraordinary island where humans and dinosaurs live in harmony. James Gurney’s stories and art fuse fantasy with realism and scientific accuracy. This major exhibition includes works from three of Gurney’s books: Dinotopia: A Land Apart from Time (1992); Dinotopia: The World Beneath (1995); and Gurney’s fourth volume in the series, Dinotopia: Journey to Chandara (2007). James Gurney will come to the Delaware Art Museum to celebrate the Dinotopia Family Day on Saturday, February 6, 2010, with a lecture at 1:00 p.m. followed by a book-signing.

“Gurney joins the company of America’s noted illustrators such as Howard Pyle (who also wrote and illustrated many of his own stories), Maxfield Parrish, and N. C. Wyeth,” said Walt Reed, founder of Illustration House.

Throughout the exhibition’s run, families are encouraged to pick up a free Dinotopia Journey Guide at the Museum’s Front Desk to help navigate the exhibition. Also, included in the exhibition is a resource room where visitors of all ages can learn more about James Gurney and the fantastical world he created in Dinotopia.

The Dinotopia storyline chronicles the adventures and remarkable experiences of Professor Arthur Denison and his son Will on Dinotopia, a mysterious “lost” island inhabited by dinosaurs and shipwrecked travelers. The faraway land of Dinotopia—wholly the product of Gurney’s imagination, scientific knowledge, and meticulous artistic ability—is a civilization like no other. The society has its own language, alphabet (dinosaur footprints that correspond to each letter of the Roman alphabet), colorful festivals, and parades. The lively cast of characters includes the inquisitive Professor Denison; Will and Sylvia, the adventurous young Skybax riders-in-training; the devious curmudgeon Lee Crabb; the beautiful musician Oriana Nascava; and a multilingual, diplomatic Protoceratops named Bix.

“The thing I love about dinosaurs is that they are on that balance point between fantasy and reality,” says Gurney. “It might be hard to believe that mermaids and dragons really existed, but we know that dinosaurs did—we can see their footprints and skeletons but we can’t photograph them or see them, except in our imagination.”

Gurney’s first Dinotopia book, the New York Times bestseller Dinotopia: A Land Apart from Time, appeared in 18 languages in more than 30 countries and has sold over two million copies. In 2002, Hallmark Entertainment produced a lavish $86 million television miniseries for ABC-TV based on the Dinotopia books that received record-setting ratings and an Emmy award for best visual effects.

Organizers and Sponsors
Dinotopia: The Fantastical Art of James Gurney was organized by the Norman Rockwell Museum, Stockbridge, MA.

Dinotopia: The Fantastical Art of James Gurney is presented in Delaware by DuPont.

In Delaware, this exhibition is made possible, in part, by grants from the Delaware Division of the Arts, a state agency dedicated to nurturing and supporting the arts in Delaware, in partnership with the National Endowment for the Arts.