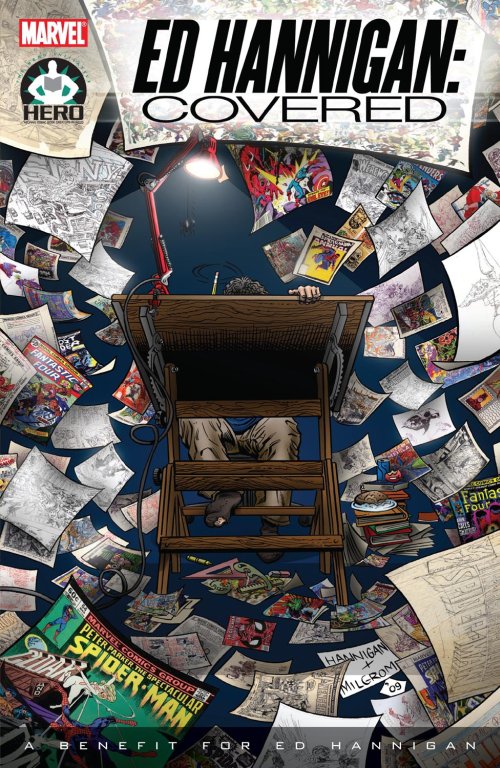 The Cartoon Art Museum and the Hero Initiative proudly present Ed Hannigan: Covered, a retrospective exhibition celebrating the art of Ed Hannigan. This retrospective features a selection of covers and original artwork created by Hannigan for Marvel Comics and DC Comics in the 1970s and 1980s, including such popular characters as Batman, Superman, Spider-Man and The Defenders.

Today, Hannigan is 58 years old and has multiple sclerosis. The Hero Initiative, a charitable organization that provides financial assistance to comic book professionals in need, and Marvel Comics have collaborated on a tribute book, Ed Hannigan: Covered, that features highlights from Hannigan’s artistic career. The Cartoon Art Museum will display some of Hannigan’s most notable covers alongside the cover and complete interior artwork for one of his most famous single-issue stories, The Spectacular Spider-Man #64, which introduced the crime-fighting duo Cloak and Dagger.

Sponsorship for this exhibition has been provided by The Comic Outpost. The Comic Outpost, located on 2381 Ocean Ave. San Francisco, CA has been fulfilling the needs of comic book lovers for well over 15 years. Current owners Gary Buechler and Roger Yan firmly believe their customer service and subscriber program is second to none. For more questions, visit their website at www.comicoutpost.net or call (415) 239-2669.

SAVE THE DATE: An auction of original artwork will be held at the Cartoon Art Museum on Friday, April 2, 2010, in conjunction with San Francisco’s WonderCon comics convention.

About Ed Hannigan
Ed was born August 6, 1951 in Newport, Rhode Island, the first of what would become eight children. His dad was an officer in the U.S. Navy, and later an engineer/sales executive for Tidewater Oil (later to become Getty Oil). He grew up throughout the Northeast, where his grandmother used to give him comic books. With their help, he learned to read at a young age, particularly impressed with World’s Finest, featuring Superman and Batman.

Ed soon became a Marvel fanatic, and was determined to draw comic books some day. In high school in Ashland, Massachusetts he practiced drawing constantly and produced comics of his own. He also illustrated the senior yearbook. In 1971, after moving to New Jersey, he managed to wrangle an invitation to visit Marvel Comics’ offices. He showed his art samples to the folks there—Marie Severin, Mike Esposito, Herb Trimpe and others. They were polite, but less than impressed. But he still kept coming around. Then one day Sol Brodsky needed someone to do some lettering corrections on the British weekly reprint series, Mighty World of Marvel. Ed volunteered and for a short while, became a letterer.

Sol then needed someone to do some zip-a-tone shading on the same reprint line. Ed and Klaus Janson took on that job and were friendly rivals for a while as they shaded photostats of old Spider-Man, Fantastic Four and Thor stories. But Ed did not give up on drawing comics, practicing and learning from the pros at Marvel. Eventually he was allowed to do some sketches for those same British reprints and finally was given a Planet of the Apes cover to draw. After that he started helping Art Director John Romita to design covers for other artists and occasionally himself to draw. He also illustrated some stories. By and by, Ed became the busiest comic cover sketch artist in the place. At one time or another he did cover designs for just about every comic in the line.

Ed tried to tailor cover designs to the style of whichever artist was going to do the final art, but he also introduced some trademark features of his own, most famously, “messing with the logo” in some way or another, destroying or distorting it. The sketches became more elaborate and often were fully colored. He continued to draw some stories ands even wrote a few (Defenders was his longest run), but cover sketches were his mainstay for the next several years, and that’s what he is best known for in the industry.

When the comics business contracted in the early 1990s, Ed was forced to find other employment. He end up doing computer graphics for a publisher in Massachusetts for nine years. In the course of those years, he was diagnosed with Multiple Sclerosis, which at first was a minor annoyance, but soon progressed to a major disability. He now lives in New Hampshire with his wife and two children.