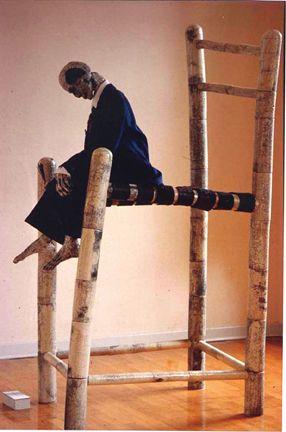 AMSET is also pleased to present an exhibition of works by internationally-renowned and distinguished German artist Hans Molzberger. On view in the McFaddin-Ward gallery, Return, or Rückkehr as it is said in German, includes four large-scale sculpture installations, as well as a recent body of mixed media works that explore current political events. Collectively, the works in this exhibition address various historical, political, and social situations that shape our contemporary world, such as terrorism and the fall of Communism in Europe.
The exhibition also features a local connection in Pleasure Island, a sculpture installation consisting of a large, hand-made wooden boat filled with fused-glass birds. Upon visiting the Port Arthur, Texas location following the devastation caused by Hurricane Ike in September 2008, Molzberger was inspired to create a work that explores not only the aftermath of this particular storm, but also the life and death associated with all major storms.
Molzberger, a self-taught artist, was born in 1953 in Höhr-Grenzhausen in Germany’s Rhineland region where his family has lived for many generations working in industrial ceramic factories. In 1982, as a result of mounting personal crises and a fervent need to reassess his life, Molzberger started a studio in Wendland, Germany and by 1991 mounted his first museum exhibition. Working mainly with assemblages and Raku ceramic objects, the artist recently turned to printmaking. He now creates woodcuts and large-scale silkscreens that contain political subject matter. Molzberger has worked in Israel, France, the Netherlands, Poland and Russia and lectured at several major universities. He currently divides his time between Germany and Houston where he is an Artist Affiliate at Houston Baptist University. He is also director of an artist residency program in Hilmsen, Germany, that began in 1996.
Following the close of this AMSET exhibition, Molzberger’s documentary art project, Never Let it Rest!, will be exhibited at the Houston Holocaust Museum from April 16 through October 3. This art project contains several large-scale installations that document the Nazi controlled town of Salzwedel where a concentration camp for women was erected in 1944.
This exhibition is funded in part by the Helen Caldwell Locke and Curtis Blakely Locke Charitable Foundation, C. Homer and Edith Fuller Chambers Charitable Foundation, Dorothy Anne Conn, Texas Commission on the Arts, National Endowment for the Arts and the City of Beaumont.