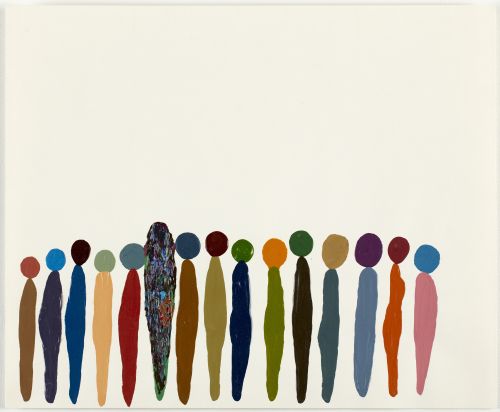 The American artist Chris Johanson (born 1968) is a self-taught product of San Francisco’s skateboard and graffiti culture. In his playful and humorous works he comments on what it is like to be human and live in today’s society. He works in widely varying media such as painting, film, installation and music.

Johanson grew up in a suburb of San José in California and began his artistic career as a teenager. He painted skateboards and made posters and flyers for his friends, and then gradually began using public space to comment on American society.Even his early drawings show a spontaneous and slightly naïve imagery. He still likes to work in public spaces such as department stores and bookshops or directly in the street environment while also exhibiting at established galleries and museums.

Johanson uses bright colours with a cartoon-like style. He is an acute observer, who in a simple and direct way conveys his observations to us. He still regards himself as somewhat of an outsider in the art world, and therefore does not feel bound by any pre-existing limitations. He enjoys exceeding boundaries – the paint spills outside his contour lines and the speech balloons are too small to contain his text.

In Johanson we encounter both the light and dark sides of society. Many of his drawings and paintings are bittersweet reflections about the small and large occurrences of daily life. He addresses important existential questions and ponders human relationships and the future of mankind. The environment has played an increasingly central role in his works, therefore he insists on using second-hand, found wood and discarded paint. Johanson tries to be a positive communicator, and his works are intended to function as a kind of alarm clock. He wants us to begin reflecting on our situation and how we live our lives.

The exhibition Alright Alright consists of new drawings, paintings and the large scale pyramid shaped installation all made specifically for Malmö Konsthall. The installation includes eight sound pieces made by Johanson’s band IS

Offering of the Angels at Michener Art Museum (Doylestown) Revelation & Regeneration, in commemoration of 9/11