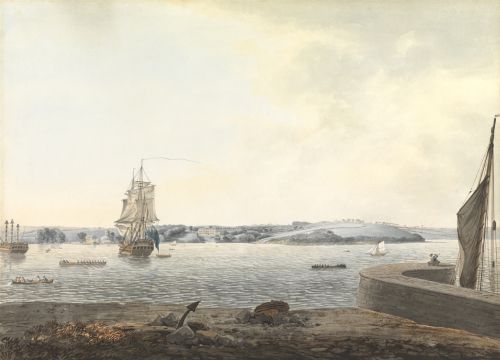 A unique loan exhibition of rarely seen works by the influential English watercolourist William Payne will go on show at the BADA Antiques & Fine Art Fair in London from 13–19 March 2013. All the paintings in the exhibition entitled William Payne (1760 – 1830): Topographer and Artist of the Picturesque will be lent by four private collectors and have rarely been seen in public. The show, curated by the expert and Fair exhibitor John Spink, will include scenes of Devon, Cornwall and South Wales painted by Payne in the late 18th century and display them alongside contemporary photographs of the same places. The exhibition, sponsored by the insurance brokers CBC UK, will provide both a fascinating historical record and a long overdue tribute to an artist who played an important part in the development of British watercolour painting.
The BADA Antiques & Fine Art Fair, held in the Duke of York Square, off Sloane Square, London SW3, is internationally renowned and is the only fair exclusive to members of the British Antique Dealers’ Association, representing the UK’s leading specialists.
William Payne was one of the mostly highly regarded watercolour painters of the late 18th and early 19th centuries. He was born in London in 1760 and showed prodigious early talent, first exhibiting at the annual exhibition of of the Society of Artists of Great Britain when he was just 16 years old. Payne was appointed to a post in the Drawing Room of the Board of Ordnance at the Tower of London in 1778. The Board was responsible for Britain’s coastal fortifications and its major task was to draw up plans and maps so Payne’s role as a draughtsman provided perfect training for anyone with artistic aspirations.
Payne was sent to Plymouth in 1782 where he was one of those responsible for improving the defences of this key naval base, regarded as a likely target for a French invasion. While he was doing this Payne was also developing his skills as a watercolourist and his draughtsman’s training to judge distances by eye gave him an
advantage over other artists. He was able to adapt the demands of topography to the needs of painting and to his own instinctive feeling for the poetical aspects of landscape. As the danger of invasion receded and his workload with the Board eased, Payne spent more time painting views of Devon and Cornwall, travelling to Seaton and Looe in the west, Okehampton to the north and Dartmouth and Exeter in the east.
As Payne’s reputation grew, he was increasingly asked to produce paintings for patrons in Devon and Cornwall. Among them were the Earl of Mount Edgcumbe, owner of the house of that name overlooking Plymouth Sound, John Parker, who lived at Saltram House, near Plymouth, and military and naval officers based in the port. It is believed that Prince William, later William IV, commissioned a number of watercolours from Payne, while he was in Plymouth as a young naval officer.
A fully illustrated hardback book on the exhibition is to be published. In it the author, David Japes, an expert on Payne, writes: “During his time in Plymouth, and in a creative burst of activity, Payne left an important record of the 18th century both there and in the South West. What has made the record invaluable is the accuracy of Payne’s topography. This emerged clearly from the decision to place recent photographs next to the watercolours. It was relatively easy in each case to establish the artist’s viewpoint; less easy to obtain a clear prospect from it such has been the scale of urban development.”
Payne’s success both as an artist and an art teacher made a move to London and a wider audience inevitable and in 1790 he went to live in a fashionable house in Bloomsbury. There he taught the sons and daughters of high society and, as a devotee of the picturesque in an age when the British landscape was increasingly favoured as a subject for painters, roamed ever further in search of the right scenes.
He made a number of tours to South Wales, an area which became increasingly important to him and the places that he is known to have visited include Swansea, Aberavon, Cardigan, Pembroke, Caerphilly and Bridgend. Few of his watercolours of South Wales have survived in good condition because by then he was using the colour indigo which subsequently faded. He also went on painting tours to North Wales, the Lake District and the Isle of Wight. All these were areas on what Japes calls “the picturesque tourist trail” providing the romantic scenery that was in fashion.
Payne died in 1830 after one last visit to his beloved West Country. Japes writes: “He had left a legacy. In his stylistic innovations he anticipated many of the advances that were to follow and as a teacher he raised the status of watercolour as an art form in which the British, above all other nations, were to excel.”