The Nelson-Atkins Museum of Art today announced a promised gift of seven extraordinary works of African art from the private collection of longtime Museum patrons Adele and Donald Hall, in honor of the Museum’s 75th Anniversary. The gifts, each a superb example of African art, will greatly elevate and broaden the Museum’s range of holdings in this area. Among the gifts are an intricately carved ivory Salt Cellar from the late 15th to early 16th century and an outstanding example of a wooden carving by the Luba artist known as the “Master of the Cascade Coiffure.” 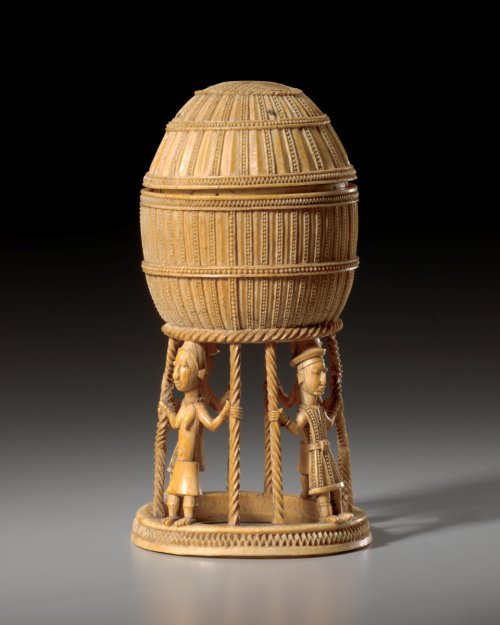 The seven works will be on view in the exhibition Magnificent Gifts for the 75th that opens to the public Feb. 13 as the capstone event of the anniversary year. The exhibition is the result of a year-long collecting initiative that inspired 75 Museum patrons to give or promise more than 400 works of art to the Nelson-Atkins, including paintings, drawings, prints, photographs, sculptures, new media art, ceramics, glass, furniture and books. The exhibition will feature 130 of the gifts.

“The outpouring of gifts has been tremendously gratifying and, as is often the case, Adele and Don led the way with their generosity,” said Marc F. Wilson, Menefee D. and Mary Louise Blackwell Director/CEO. “They are setting once again an example of what individuals can do to share their passion in a way that matters and that benefits the public. Each of these works of art has a personality and a story, almost like a family member in the Hall household. Any museum would be thrilled to have these, but we are especially honored to receive art personally acquired by the Halls.”

The Halls are long-time benefactors of the Nelson-Atkins who have greatly influenced and supported the Museum’s collection-building and recent expansion project. Mr. Hall is chairman of the board of Hallmark Cards Inc., a company founded in Kansas City by his father, Joyce Hall, 100 years ago. Mr. Hall has served on the Nelson-Atkins Board of Trustees for 29 consecutive years, beginning in March 1980, and Mrs. Hall helped lead fund-raising efforts in support of the Generations Campaign and a $100 million endowment initiative.

The Halls bought their first piece of African art within the first year of their marriage. They found themselves drawn to African works because of the tremendous sculptural quality, the power and contemporary nature of the designs, and the function of the objects within their cultures. Throughout the years, they have been advised by curators and specialists in the field, and they continue to acquire important works.

“None of these pieces were originally made to be in a private collection,” Mrs. Hall said. “They were designed to honor an ancestor, or to carry soil from one home place to another, or to bind a contract, or for ensuring fertility. There was a great deal of ceremony involved.”

Masterworks from the Hall Collection

The seven works promised to the Nelson-Atkins are as follows:

Headrest, African, Attributed to the Master of the Cascade Coiffure, Luba peoples, Democratic Republic of the Congo, late 19th – early 20th century. Wood, glass beads, and copper, 5 5/16 x 4 ½ x 3 ½ inches. Promised gift of Adele and Donald Hall in honor of the 75th anniversary of The Nelson-Atkins Museum of Art, 14.2010.2.

High-ranking Luba women and men slept with headrests such as this to protect elaborate hairstyles, which indicated civilized refinement and both exterior and interior beauty. This headrest is attributed to the “Master of the Cascade Coiffure,” one of the most renowned 19th-century Luba artists. With its animated female figure, it is an outstanding representative of the diminutive, elegantly carved headrests attributed to this artist, or workshop.

This intricately carved salt cellar with its beautifully rendered figures is one of the more important Sapi-Portuguese ivories. It is attributed to a workshop distinguished by salt cellars featuring cylindrical, openwork bases, and it is carved from one piece of ivory (excepting the lid). A luxury object, it would have been commissioned by Portuguese from local workshops, and incorporates an inventive combination of European and African design elements. The egg-shaped container is decorated with narrow beaded bands (a European embellishment) and supported by four standing figures (an African innovation).

This elegant sculpture was created to house one of the powerful wilderness spirits that communicated with Baule diviners during trance possession. Wilderness spirits, although frightful and inhuman, are attracted to images of ideal human beauty, characterized by this figure’s enlarged head, intricate hairstyle and beard, elongated neck and scarification. The wilderness spirit may partner with a male or female by possessing and placing the diviner in a trance state. The spirit can then communicate remedies for personal or community misfortune to the diviner.

Worldly, wise and peaceful, this beautiful mask with its elaborate coiffure and scarification captures the idealized beauty of a mature Punu woman. It is an outstanding example of masks of this type, which would have appeared in masquerades during funeral celebrations to represent a young woman’s spirit. Applications of white kaolin clay were associated with the spiritual realm to depict female and male ancestral spirits.

This masterfully carved personal shrine figure is one of the most important Igbo ikenga figures, or those dedicated to male power and achievement. Rams’ horns symbolize male aggression and determination, and the curved sword symbolizes decisive action. The eagles and python-reigning creatures of sky and water allude to supreme achievement in life, including military endeavors. Human trophy heads symbolize military success, and European pith helmets on the trophy heads express continuing power despite the challenges of colonial rule

This serenely composed figure, adorned with armlets and waistbeads, displays the idealized traits of a Baule spirit wife: an elegant coiffure, beautifying scarification and filed incisors. According to customary beliefs, all men and women have other-world mates with powers to influence their human partners’ lives. Sculptural representations of one’s spirit spouse could be commissioned for a shrine situated in the privacy of one’s sleeping room.

The ivory figure, half female and half leopard, appears to represent a founding ancestress of the Yombe. The royal woman holds two gourds that may contain potent medicines associated with rulers’ occult powers. The snarling leopard with its serpent-headed forepaws is a fearsome representation of royal authority and military prowess. Two spiraled staffs flanking the leopard may be royal mvwala staffs drawing power from the earth and ancestral dead. Ivory and the warm, red tone of this figure, achieved through the application of red palm oil, represent powerful spiritual forces.