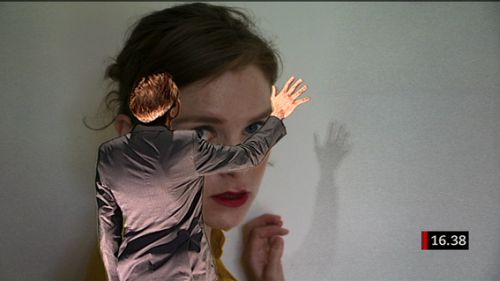 In Camera is a performance-based video installation by American artist Liz Magic Laser. Laser’s project for Malmö Konsthall is part of a new body of work that focuses on the relationship between the news media and the public. For In Camera Laser takes the structure of a television news program as the basis for an adaptation of Jean-Paul Sartre’s Huis Clos. The three characters in the play are recast in archetypical news program roles: an anchorman in the studio, a reporter on location and a “real” person who gives testimony in a domestic space. The five-channel video installation is composed of feeds of each of the three characters, as well as teleprompter footage of the script and a view of Laser and the technical crew in a television news studio control room.

Laser rehearsed the play with all three actors in the same space, but it was performed and filmed with each actors in separate locations: in a SVT television news studio in Malmö, on the street in Gustav Adolfs Torg also in Malmö, and in the Finn Juhl House in Ordrupgaard, Denmark (a museum and the former home of the late Danish architect). The performers had to communicate through a satellite conference call that imposed a three second delay. Only the anchorman in the studio could communicate via live feed video of the reporter on the scene. All five video channels were filmed simultaneously in a single take. This produced a heightened situation in which the performers, technical crew and Laser had to confront technical communication breakdowns. Laser’s process came to parallel Sartre’s plot of people trapped in their relationships in a room they could not escape. Sartre’s allegory about a hellish three-way dynamic becomes an instrument for navigating the relationship between current events, the news media and the public.

Laser’s live performance and video projects intervene in spaces such as banks and movie theaters, and have involved collaborations with actors, dancers, surgeons, and motorcycle gang members. She stages situations, dialogues, monologues or plays in the urban environment and its population becomes both her audience and her extras in the resulting videos.