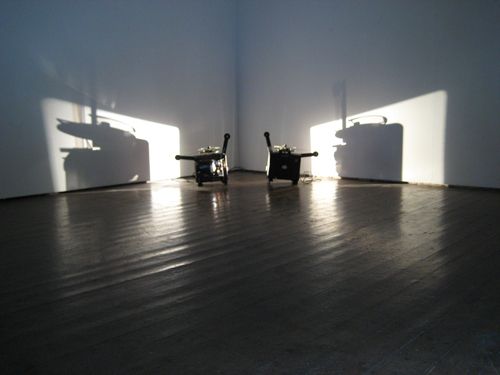 In this exhibition, Barba’s carefully choreographed installation divides viewers’ attention between the projected image and projector itself, posing questions as to which is the narrative and which the narrator. The artist’s distinctive use of light and sound permeates the gallery, resulting in a compelling, multi-sensory experience composed of a range… of different objects, images, forms and surfaces.

Along with the selection of sculptures and films, Barba has created a new publication for this exhibit ion, Printed Cinema 11: Idea in Abstract. This is the latest in a series of publications that Barba produces on the occasion of her exhibitions, where they are distributed for free. They constitute a kind of readable and portable film. In this case, images of the vast industrial inscription in the Mojave desert from her film The Long Road 2010 are juxtaposed with small hieroglyphic markings on the walls of a subterranean structure, each given equivalence of scale by the medium of film.

Rosa Barba was born in Italy in 1972. She lives and works in Berlin.