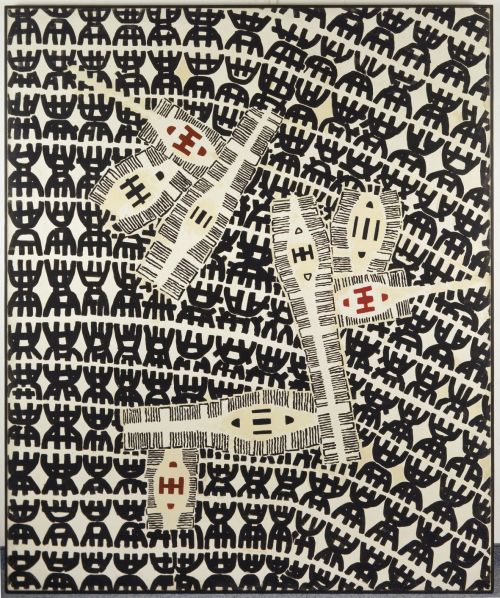 With CAPOGROSSI. A Retrospective, curated by Luca Massimo Barbero, the Peggy Guggenheim Collection pays tribute to a major figure in the first generation of post war artists who, with his painting Surface 210 (1957), has been represented in the collections of the Solomon R. Guggenheim Foundation since 1958. The distinctive “sign” of Giuseppe Capogrossi (1900–1972), like Lucio Fontana’s gesture of piercing the canvas, or the materiality of Alberto Burri’s works, has left an indelible mark on the history of Italian art in the 20th century. This exhaustive retrospective explores Capogrossi’s unique contribution to 20th-century art, tracing the evolution of his signature abstract style of grandiose orchestrations of mark and color, and its numerous variations over the subsequent decades. With his endlessly inventive deployment of his fork-like symbol, Capogrossi became synonymous with the Italian boom of the 50s and 60s, a period of optimism and rapid economic expansion.

With the collaboration of the Fondazione Archivio Capogrossi, Rome, and with the patronage of the President of the Italian Republic and of the Italian Ministry of Culture, this long overdue retrospective brings together over seventy of the artist’s paintings and drawings, covering the span of his career. The Peggy Guggenheim Collection is grateful to lenders public and private who have contributed works to the exhibition, notably the Galleria Nazionale d’Arte Moderna in Rome, which made available an important core of major works, the Centre Georges Pompidou in Paris, the Museo d’Arte Moderna e Contemporanea (MART) of Rovereto and Trento, the Galleria d’Arte Moderna in Turin and the Guggenheim Museum in New York.

The exhibition is accompanied by a substantial monograph edited by Luca Massimo Barbero, and published by Marsilio Editori. Commissioned in collaboration with the Fondazione Archivio Capogrossi, eleven essays cover all aspects of his career from his beginnings in the 1930s through to his international recognition in the 50s and 60s, his exhibitions, and his relations with national and international critics.

The exhibition is supported by the Veneto Region and Intrapresae Collezione Guggenheim. Programs auxiliary to the exhibition are supported by the Fondazione Araldi Guinetti, Vaduz. The organizers are grateful for the collaboration of the Corriere della Sera, for Listone Giordano’s technical sponsorship, and to Radio Italia as media partner. Hangar Design Group designed the exhibition’s publicity materials.