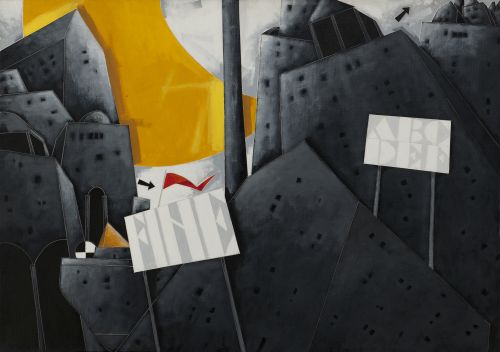 Fondazione Marconi is pleased to announce the exhibition Emilio Tadini 1985 – 1997. Refugees, Philosophers, the City and the Night set up on the occasion of the ten years since the death of the milanese artist.

The exhibition, displayed on three floors of the exhibition space, is devoted to the last activity of the painter: the works shown are those produced from 1985 to 1997.

The show is the prosecution of the exhibition Emilio Tadini. 1960-1985 L’occhio della pittura opened in 2007 at Fondazione Marconi, Fondazione Mudima and Brera Academy of Fine Arts and dedicated to the beginning of the artistic activity of Tadini until 1985.

Considered one of the most original voice among the cultural debate in the postwar period, since the beginning Emilio Tadini developes his painting through cycles, with a surreal atmosphere made by literary and oniric elements, everyday objects and characters, often fragmentary, where the laws of time and space are totally cancelled.

From the second half of the Eighties Tadini focused his attention on particular themes and solutions that will appear strikingly in the triptychs of the following decade.

First of all the theme of the city, developed in the series Città italiane, where emerges fragments of architectures: it’s a contorted architecture, with overshadowing buildings piled up one on the other, that convey almost a claustrophobic feeling.

Another theme that will be worked out later in the tryptichs is the one of the refugee.

The artist tells that he has always been enchanted by the photos of the refugees on newspapers: “the refugee is a metaphor that represents well our current condition – our cultural conditions, high or low.

To land, to go away … to leave all the certainty … it could happens that the refugee leaves, among many things, also some fragments of the famous subject. But there’s no need to make a meal of it.”

In Profughi (1986) there is a figure with a wardrobe up on his back from which fall down personal objects, books, paintbrushes, tube of paintings, in short the memories of the character, his own memory.

On the background the word refugee.

The main protagonist of the series Inno alla notte are isolated figures, thoughtful as the one with the word pietas, in the dark of the night, lit up just by a feeble light of a candle.

In the series dedicated to Oltremare a kind of surreal Pinocchio floats in a midnight blue background with the words Now and Where that in a painting become Nowhere as to say that the space of that painting is not a real one.

These works are filled up with figures and colours and this is the starting point for Tadini‘s tryptichs.

In these tryptichs the overabundance of elements typical of the previous works is brought to a fault when the space of the canvas is tripled and the painting turns narrative.

Arturo Carlo Quintavalle, one of the most authorative critics of the artist, writes: “Tadini wants to paint like writing a story, he doesn’t want the coexistence of figures, but a reading in sequence, with a start and an end, with a climax of the action and with breaks.”

In the tryptichs, it’s the figure that prevales: an obsessive stratification of bodies like in Il corridore notturno, Music Hall and Insomnia Night.

Six of the triptychs are devoted to Il ballo dei filosofi: oppressed figures, confined in a narrow space.

“It’s important to recover the figure, says Tadini, and he alludes to humanity, but here their dimensions, their nonsensical proportions, make impossible any kind of relationship”. (Arturo Carlo Quintavalle)

Some drawings of large format (150 x 100 cm) are also on display: Chateau d’amour, Aux cieux vagues, and mannequins floating in space like the series dedicated to Figures, portrayed through coloured jackets on coat hangers.

“The piece of paper is the ideal mean to experiment, to test certain ideas, and most of all to abandon myself to upcoming ideas, or rather the ideas that are the product of associations and relations that probably took place, without me realizing it, in some semidark part of my conscience, and maybe at great speed”.