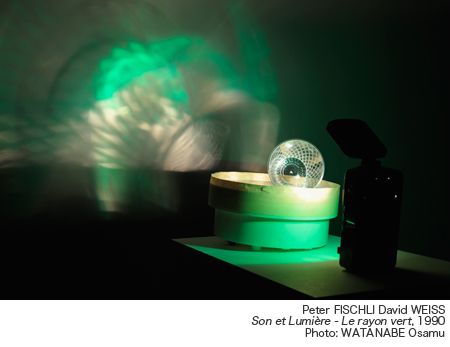 On the face of it, it seems that modern civil society has secured freedom and material abundance through economic development, science and technology. In our information-oriented society, speed, comfort, and convenience are regarded both as beneficial and wholesome values. At the same time, however, in order to facilitate the pursuit of these benefits, human life has become more and more regimented. In other words, we are controlled by the institutions and authorities of the society to which we belong. The earthquake and tsunami of March 2011 and the Fukushima nuclear disaster completely undermined the sense of security, happiness, and freedom that form the foundations of society. The economic, social, and other systems that democratic societies have chosen in order to realize human freedom have become threats to the very survival of human society.
“Son et Lumière, et sagesse profonde” (Sound and light, and wisdom) explores the potential for humans to confront head on the contradictions in the world and remain standing in the midst of such despair.
Some of the artists whose work is on show direct a piercing gaze at human society and bring to light the festering matter. Others embrace despair itself, using methods that can only be described as semi-masochistic to depict individuals who are determined to survive against the odds. Their expression exposes the fabric of a human society that is destitute and helpless. They see in despair the seeds of the future, and in the human condition an existence possessed of a life force that is fleeting yet struggling to survive amidst a maelstrom of suffering and chaos.