The Masterworks of Charles M. Russell: A Retrospective of Paintings and Sculpture 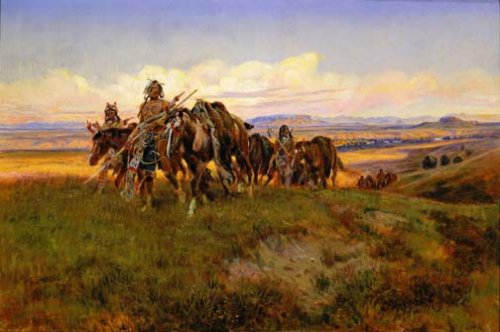 [ad#lb]
The Masterworks of Charles M. Russell: A Retrospective of Paintings and Sculpture will highlight more than 60 major works in oil and bronze by the renowned western artist (1864-1926). Revising conventional concepts about the artist, the exhibition will open at the Denver Art Museum (DAM) on October 17, 2009 and continue through January 10, 2010. This exhibition, the first-ever major retrospective of Russell’s painting and sculptural work, was co-organized by the Denver Art Museum’s Petrie Institute of Western American Art and Gilcrease Museum, Tulsa, Okla.

“Russell’s art continues to influence American western painters and sculptors, and his distinctive way with words has affected entertainers and political commentators from Will Rogers on,” said Joan Carpenter Troccoli, senior scholar with the DAM’s Petrie Institute of Western American Art and curator of the exhibition.

“This exhibition will reveal his strengths as a fine artist – and those accustomed to filing Russell away as the original ‘cowboy artist’ will find many surprises.”

One of the surprises is the variety of his subjects and the range of his expression. Russell was known for his detailed depictions of minute elements of cowboy gear and complex movement. The depth of his concern about the destruction of native Northern Plains people and landscapes and his tolerance for human differences are hallmarks of his work. Russell viewed Indians as complex beings who held the only truly authentic claim to the American West, and protested governmental injustices and public indifference to their removal from their ancestral homelands. Indian women often were subjects in his work – in fact, depictions of Native Americans outnumber cowboys in his work by three to one.

In addition to revising the concept of Russell as a cowboy artist, the exhibition and accompanying catalogue will invite a close look at his development as an artist. With no formal artistic training, Russell relied on his powers of observation, discipline and commitment, drawing inspiration from magazine illustrations as well as the work of earlier western artists including George Catlin, Karl Bodmer, Carl Wimar and Russell’s contemporary, Frederic Remington.

Born in 1864 and raised in St. Louis, Mo., by a well-to-do family, as a child Russell enjoyed sketching and modeling animal figurines in wax and clay. He tended to identify with his pioneering relatives – including an uncle who established a major trading post on the Santa Fe Trail and married a Cheyenne woman – rather than the high society inclinations of his immediate family circle. He left home with his parents’ reluctant blessing at age 16 to live in what was then the Montana Territory and work on a sheep ranch. He eventually took a job as a cow hand and while herding cattle enjoyed his first taste of fame for his watercolor, Waiting for a Chinook, which features an emaciated cow encircled by wolves. The painting was his response to a cattle owner’s query about how his herd had weathered the devastating winter of 1886-87.

Russell became an artist in demand after Waiting for a Chinook, and his work dovetailed with a time in American history when all things western were being consumed in many forms, including magazine articles, novels and western films that eventually became a movie genre of their own. He married in 1896 and shortly thereafter moved to Great Falls, Mont., where he lived and worked for most of his life.

The exhibition will open with the action-packed cowboy paintings for which the artist is best known, and will conclude with his heroic portrayals of wildlife in pristine western settings undisturbed by man. Section by section – from cowboys, outlaws and lawmen; the interaction of Indians and whites in the west; native life in all its aspects; white trappers and hunters; to wildlife and wilderness – the exhibition‘s organization corresponds to Russell’s increasing alienation from modern urban civilization and growing devotion to pure nature.

“Russell captured the landscapes, people, culture and spirit of the American west in his paintings and sculptures,” said Thomas Smith, director of the Denver Art Museum’s Petrie Institute of Western American Art. “This exhibition is truly a once-in-lifetime opportunity to experience these masterworks in one exhibition, and visitors will see why Russell is the most beloved artist of the American West.”

The exhibition will be on view in the Gallagher Family Gallery, located on the first level of the Frederic C. Hamilton Building. A catalogue titled The Masterworks of Charles M. Russell: A Retrospective of Paintings and Sculpture, edited by exhibition curator Joan Carpenter Troccoli with a foreword by Denver Art Museum Director Lewis Sharp and Gilcrease Museum Executive Director Duane King, will be available at the Museum Shop.

The Masterworks of Charles M. Russell: A Retrospective of Paintings and Sculpture is organized collaboratively by the Denver Art Museum and Gilcrease Museum.

Wells Fargo is the local presenting sponsor, with significant support provided by the Helen K. and Arthur E. Johnson Foundation. Additional support is provided by The Adolph Coors Foundation Exhibition Fund, Sotheby’s, Mr. and Mrs. Thomas A. Petrie, the citizens who support the Scientific and Cultural Facilities District and the generous donors to the Annual Fund Leadership Campaign. Promotional support is provided by The Denver Post and 5280 Magazine.