The Madonna as Muse: The Paintings of René Alvarado 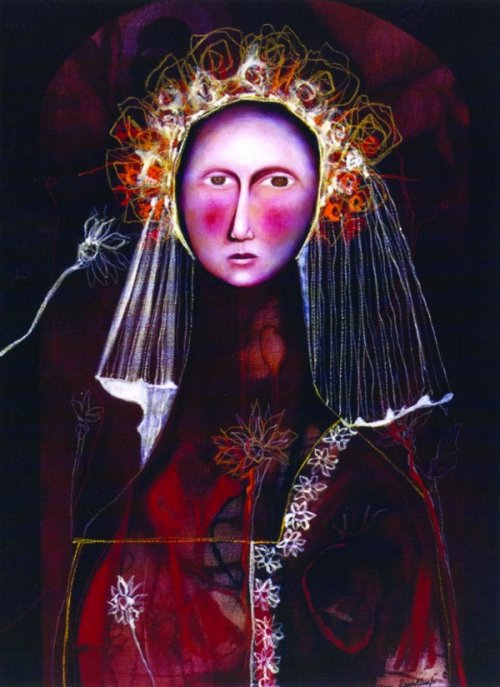 [ad#lb]
This fall, visitors to the Art Museum of Southeast Texas can immerse themselves in the spiritually and iconographically rich paintings of Mexican-American artist René Alvarado. The Madonna as Muse, organized by the San Angelo Museum of Fine Arts, includes 14 paintings of various sizes. It is accompanied by a brief documentary highlighting the artist’s life, artistic influences and inspirations.

Alvarado, who has been painting professionally for 15 years, defines his work by “my familial roots in northern Mexico and by the subtle, challenging and mystical environment of my adopted home in West Texas.” The artist was born in 1972 in the small village of El Manantial, Coahuila just outside of Torreon, Mexico and emigrated with his family to the United States at the age of seven. He currently resides in San Angelo, Texas where he has created a unique living and working space in a converted Lutheran church originally built in the 1920s.

A critical component in identifying Alvarado’s meaning in his paintings is environment, which for this artist comprises both his Mexican heritage in El Manantial and his current life in San Angelo. Alvarado comments, “My body of work is a layering of imagery, metaphorically narrating the lives and experiences of those who have made an impact in my life. I paint what I feel, that which is me, and my surroundings. You will see on canvas the richness of my grandparents’ folk tales alongside the adventures of the ‘new life’ created by my hardworking, immigrant parents. Through symbolism, metaphors, and pictorial language, I tell my story.”

Another important visual component featured in the paintings in the exhibition is the repeated use of the image of the Madonna. In describing his decision to incorporate this religious icon into the majority of his works, Alvarado states, “I have come to associate my Madonna paintings to the traditional and sense of pride of Mexican women- my grandmothers, my mother, and now sisters. Each one speaks straight from the heart and with such poetic nature! She has become my muse, and equally important as my landscapes, seascapes, and still lifes. She is as important as the paint I mix and the brush I hold.”

AMSET is pleased to present this exhibition of this emerging artist’s work currently represented by Valley House Gallery in Dallas and Gallery Shoal Creek in Austin.