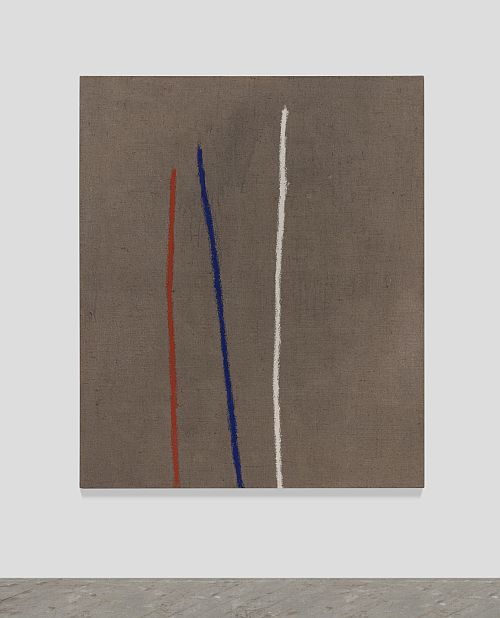 Robert Davis will present in march his frst solo exhibitoon in our gallery with a new body of work.
Using unconventional materials like wine, beer, coffee or ash, combining them with oil or olisticks, the artist use elements that normally stimulate the ordinary life of every person to explore the boundaries between the different sensory perceptions related to the paintings in both ways of optical perception combined with a more sensitive feeling that the materials reveal to the viewer.
Representing gestural forms, the artist slide the point of interst on how these materials react on the canvases, burlaps, linens or leathers he use for painting. The causality of this reaction often depends from the single kind of material, every one used is different and have different reactions of colour with the media itself, like every wine or used beer, for instance, contain a different and unique palette and feeling when fxed in a single work.
This random of substances in accompanined by gestural nature of the sign. The act of painting has to be seen in the gesture of rubbing, brushing, pouring or scratching.
“When I start a painting I don’t want any reference points. There are direct actions visible in the work. The whole thing evolves visually to that there are never any perceptions. My paintings have a close relationship to drawning and structure, to directon and rhytm. I like wine. I also like coffee and cigarettes. Viewing a painting is much like consuming it. We take it and then decide whether we like it or not. On the other hand, I undertsand that painting is nostalgic. I love period pieces. I draw on that nostalgia for my palette and titles.
My use of colour in one thing in my practice that refers clearly to something outside itself. certain events, room, places, things that I have read, heard or experienced in any way can dictate choice of colour. This same sense of nostalgia also informs the collage paintings. Sometimes a photo falls into my lap and it does what it is supposed to do”.
The use of text, found images and unconventional materials acts as a break in intelligibility that calls attention to the code. Naming Davis a code-breaker, misses the deeper impact of his work, which is all about affection. Updating Dubuffet’s Texturologies, Davis uses bases and addictive substances to gesture toward the real feeling of the world and our sense’s inadequacy to understanding it. His titles are an important part of this, not just the name of a thing, but an indication ofhis serious ans sentimental intentions.
“I know it’s ok to be inspired by John Cougar Mellencamp as much as it is to be inspired by Malevich, I know it’s ok to be a banker with a spray paint fetish, and I know when I’m looking at a Robert Davis painting I’m looking at something trascendent crafted from biblically elemental materials. Paintings made of wine and weed, coffee and cigarettes with their sacramental perfect linen below them, smears of history like Veronica’s Veil above, the supports an altar for the marks” “I got more milk than Louis Pasteur” is the source for the title of a Robert Davis painting and it’s a pithy analogue for his deft combination of swagger and sincerity.
Robert Davis began his carrier presenting collaborative works with Michae Langlois made by the common interest of the two artists. During this early years they were also hosted by the Museum of Contemporary Art in Chicago for a solo show and at the Magdeburg Museum for another solo exhibition curated by they’re friend Rashid Johnson with whom Robert Davis still works.