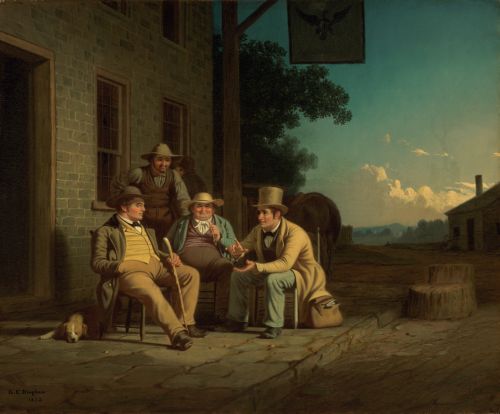 To honor the 200th birthday of George Caleb Bingham, the esteemed artist who depicted Missouri frontier life, The Nelson-Atkins Museum of Art will launch a bicentennial exhibition, Bingham@200, and a birthday weekend of events for the entire family on Saturday and Sunday, March 19 and 20.

The bicentennial exhibition and events are part of a Missouri-wide celebration of Bingham that involves the Harry S. Truman Library and Museum, Missouri State Historical Society, Arrow Rock Historic Site and the Kansas City Public Library.

Born in Virginia on March 20, 1811, Bingham came to central Missouri as a boy in 1819 and grew up not far from the Missouri River. As an artist, he secured a national reputation with his portraits and paintings of fur traders, Native Americans, riverboat men, the political process, and everyday scenes of frontier life. In 1840, the Boone’s Lick Times christened Bingham “the Missouri artist”—a moniker embraced by New York art critics.

On view from March 9 to Oct. 2, the Nelson-Atkins exhibition will feature nearly 30 preparatory drawings held at the Museum on behalf of the Trust for the People of Missouri. They reveal intriguing insights into Bingham’s process for developing his compositions from concept to canvas. Many of the precisely rendered ink and pencil sketches relate directly to genre paintings of river life and the frontier democratic process that rank among the artist’s most beloved scenes.

To complement the drawings, Stump Speaking (1853–54), one of Bingham’s ambitious, multi-figure paintings on loan from the St. Louis Art Museum, will be on view in the American galleries, along with several of his oils from the Nelson-Atkins’ own rich collection, including such favorites as Fishing on the Mississippi and Canvassing for a Vote, as well as fine portraits of Missouri notables.

Although Bingham had no formal training, he started painting by the time he was 20. In his first decade as an artist he worked as a portraitist, filling commissions for prominent Missouri residents. Bingham’s horizons expanded in 1838 with a trip East, where he met artists and studied American and European art. He also learned of the growing demand for art with uniquely American subjects.

An ardent Whig, his experiences in state and local politics informed his scenes of frontier river activities and the American democratic political process. AfStarredter a stay in Düsseldorf, Germany, from 1856 to 1859, Bingham relocated to the Kansas City area where he continued to paint mostly portraits until his death in 1879. Additionally, in 1877 he was appointed the first professor of art at the University of Missouri in Columbia. Bingham is buried in Kansas City’s Union Cemetery, and his Arrow Rock, Missouri, home is preserved as a State Historic Site.