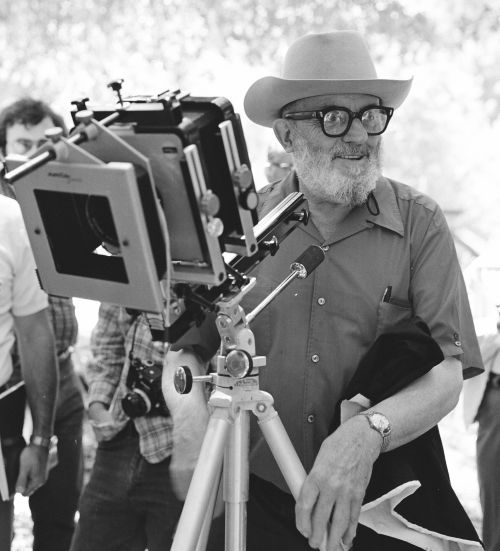 Missoula Art Museum is proud to host a definitive exhibition by one of America’s most legendary photographers. The exhibition Ansel Adams: A Legacy consists of over 130 gelatin silver prints by the artist whom many consider an American master.

We cannot overstate Adams’ role in the construction of a contemporary visual language to interpret nature. Adams married his craft with an intense love for the environment and his deeply rooted expressions will not be lost on our Montana audience. As he once stated, “I make photographs for personal expression. If it is used for the cause—why, I’m very happy.”

The San Francisco born photographer was raised in a nurturing and cultured environment by parents who believed in the Transcendentalist ideas of individuality and the direct union with God in nature. Bored and disheartened by school as a boy, Adams instead found intellectual freedom in the liberal arts, his father arranging tutelage in studies including ancient Greek and the piano.

Adams fell in love with nature and his ability to capture its truest qualities on film when he first visited Yosemite National Park on a family vacation. It was in Yosemite Valley that he took his first photographs with his first camera, a Kodak Box Brownie. Adams life was devoted to his work, turning out meticulously produced images of the American West and its National Parks. Adams sought to express the spiritual connection between the earth and its inhabitants through his photographs in the hopes of convincing others of the necessity of preserving National Parks.

Adams’ passion for photography and the American wilderness had a tremendous impact on the public perception of America’s wild lands, and the art that allowed him to share its beautiful and inspirational landscapes with the world. Lobbying with his own photographs as motivators for environmental protection, Adams dedicated himself to the untouched landscape as a spiritually redemptive power. He believed human beings best understood their world and themselves if seeing themselves in proportion with, rather than in opposition to, nature.

A technical master, his revolutionary development of the zone system gave photographers more control over the resulting images than ever before and remains a staple of photography. As one of the first and most resolute believers that photography was a tool of fine art and not merely a means of documentary, he was hugely influential in the practice both in its technical advancement, and in its evolution into an established medium of fine art.

In addition to the large number of landscape photographs, this exhibit will also feature Adams’ talents as a portrait artist, and includes candid portraits of Alfred Stieglitz, Dorothea Lange, Georgia O’Keefe, and others. Like his landscapes, his interest in portraiture transcended mere documentation and captured the essence of the sitter’s character. Adams once said, “To photograph truthfully is to see beneath the surface and record the qualities of nature and humanity which live in all things.” Regardless of landscape or portraiture, the exhibition elucidates an artist who is deliberate in his practice, with a clear vision and a deep appreciation of the natural world.

Adams died on April 22, 1984 at the age of 82, four years after receiving the Presidential Medal of Freedom, the highest civilian award in the land. Six months after his death, Congress passed legislation designating more than 200,000 acres near Yosemite as the Ansel Adams Wilderness Area. A year later, an 11,760-foot mountain on the boundary of Yosemite National Park was named Mt. Ansel Adams.

This private collection of photographs is on loan courtesy of Lynn and Tommie Meredith. We are grateful for their faithful support, and applaud their advocacy of education and their commitment to continue to celebrate the legacy of this iconic photographer. The exhibition will serve as the core for the Fifth Grade Art Experience, which is co-sponsored by the Art Associates of Missoula. In its 25th year, the Art Associates of Missoula have focused on artists providing guided tours of the exhibitions with a hands-on experience for every fifth grade classroom in the county of Missoula.

It is understood that this exhibition is an educational opportunity for art appreciators of all ages and is supported by an extensive series of public programs including lectures by regional scholars, panel discussions, films, and free public tours by area artists. MAM would like to thank our Major Sponsor the Sierra Club and our Producing Sponsor First Security Bank. We would also like to thank the additional exhibition sponsors: the Montana Chapter of Sierra Club, Missoulian, Montana Radio Company, Lamar Advertising, Missoula Public Library, and Rocky Mountain School of Photography.