An Independent Spirit: The Art and Life of R.A.D. Miller 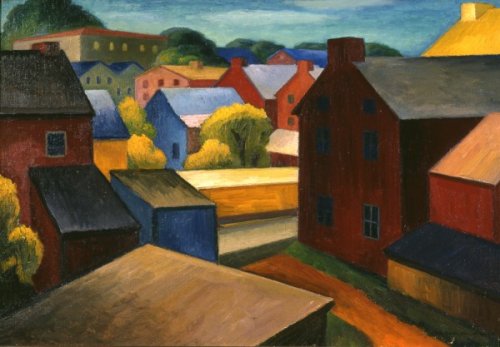 [ad#lb]
Robert Alexander Darrah Miller was one of the most accomplished landscape painters in Bucks County, although he resisted being labeled as such; indeed, resisted any labels at all. Some of Miller’s finest work has been assembled in An Independent Spirit: The Art and Life of R.A.D. Miller, on exhibit at the Michener Art Museum from August 15, 2009 – January 3, 2010.

An Independent Spirit is sponsored by Mary Lou and Andrew Abruzzese of The Pineville Tavern.

An Independent Spirit is curated by Dr. Cher Krause Knight, Associate Professor of Art History at Emerson College in Boston, who wrote the companion publication while serving as the Michener’s Helen Hartman Gemmill Research Fellow. The 64-page book has more than 30 color images. It will be available in the DeNoon Museum Shop.

Paintings by some of Bucks County’s more familiar impressionist painters overshadowed his work, although they were all friends and colleagues. Miller was known for his portraits and still lifes, and his colorful and distinctive style also caused him to be compared to New Hope’s modernist painters, a label he disliked. Miller was simply one of the most gifted, although underappreciated, painters of his day, and proved that many times over in a variety of genres.

Miller studied with Daniel Garber at the Pennsylvania Academy of the Fine Arts, in his hometown of Philadelphia, from 1923 to 1927. He moved to Bucks County the year after he graduated and married Celia Belden Marshall, a former actress and the daughter of the owner of Phillips’ Mill.

He lived his life and made his art on his own terms, but “had great regard for convention and its keepers, chief among them Daniel Garber,” writes Dr. Knight in her book. “Yet there seemed to be something restless about him, a personal dissatisfaction with the status quo of Pennsylvania landscape painting and impressionism in particular, which led his style in a quiet progression toward more forward-looking explorations, despite his vocal hesitations about the ‘moderns.’”

R.A.D. started drawing around age 6, perhaps as a way to escape the uncertainty of his childhood: his parents separated when he was young, and he lived with his grandparents and then an aunt, and was raised primarily by his nanny. His daughter-in-law Eleanor Miller described him as having “a sadness, always, in his life.”

Although teaching was never a major part of his career, he taught painting en plein air (outdoors) in the 1940s at the Holmquist School for Girls. Miller and Celia had two children, but according to his daughter, Darragh, each of his paintings was also like a child to him and he struggled to sell them. Instead, he made his living mainly by commissions, which were mostly portraits.

Miller was a Renaissance man in many ways: he was interested in world politics; taught himself Spanish; read about mathematics; was a skilled carpenter; designed jewelry and clothing; and he sailed extensively throughout the Caribbean islands. His reputation remained centered in the east however, and especially in Bucks County, and he was unconcerned about winning medals, prizes, and acclaim. His daughter said that RAD was distraught by the commercialism of art and didn’t want to contribute to it. Throughout his life, the artist praised simplicity and said, “I just paint. I think you just paint and you paint according to your time and environment.”

“He was truly an independent spirit, both in his art and in his life,” adds Knight. Dr. Knight will present a lecture on Tuesday, August 25 at 1 p.m. The fee of $8 member/$15 non-member includes general museum admission. Knight will discuss the challenges in researching this extremely talented though underappreciated artist. Beyond the sensationalized aspects of Miller’s life, we find a complex man who forged his own personal style, rather than subscribing to the traditions and trends set by others. With this renewed interest in the artist, Miller emerges as deserving of more attention and wider recognition.