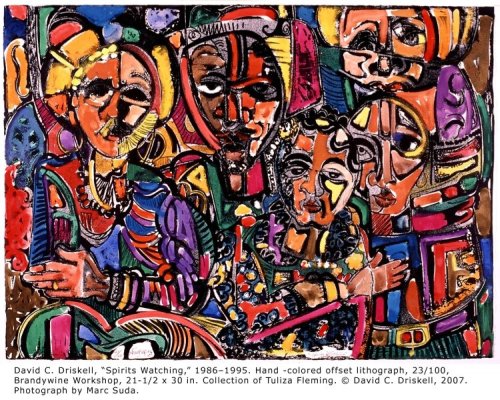 [ad#lb]
The first exhibition to highlight the prints of renowned artist and scholar David C. Driskell will be on view at the High Museum of Art in 2009. “Evolution: Five Decades of Printmaking by David C. Driskell” will open on April 21, and will remain on view through August 2, 2009. Featuring 80 prints which provide insight into Driskell’s artistic process and development, the exhibition will be presented in conjunction with the fifth anniversary of the High’s David C. Driskell Prize for achievement in African American art and scholarship.

Organized by the David C. Driskell Center for the Study of the Visual Arts and Culture of African Americans and the African Diaspora at the University of Maryland, College Park, “Evolution” premiered at the Driskell Center and traveled to the Wichita Art Museum before its exhibition at the High. It will subsequently travel to the Portland Museum of Art, where it will be on view October 27, 2009, through January 17, 2010.

Throughout his work, Driskell has drawn upon diverse sources while developing an artistic language of his own. “Evolution” will feature woodcuts such as the “Bakota Girt” series (1972-1974) and “Benin Woman” (1975), which reveal the influence of the artist’s travels to Africa and his desire to enrich his own connection to African culture. In “Bakota Girl 1,” Driskell draws inspiration from a Kota reliquary, while also referencing Byzantine Christian iconography through his use of gilt and jewel tones.

Over the course of his career, Driskell has explored the intersection between African sculpture, Modernist aesthetics, and the tradition of Western art. In his “Reclining Nude” (2000), Driskell references Matisse’s “Blue Nude” of 1906, reclaiming the African imagery which served as a key source of inspiration to 20th-century modernists.

Examples of Driskell’s self-portraits will also play an important role in the exhibition. Spanning more than thirty years, these works reflect the artist’s wide range of stylistic approaches, from the traditional pose and naturalistic representation of “Self Portrait” (1970), to “Pensive” (2004), in which Driskell transforms his own features into to those of an African mask.

Exhibition Organization, Support and Catalogue
“Evolution: Five Decades of Printmaking by David C. Driskell” is organized by the David C. Driskell Center for the Study of the Visual Arts and Culture of African Americans and the African Diaspora at the University of Maryland, College Park. It is curated by the Driskell Center’s Curator-in-Residence, Dr. Adrienne L. Childs. The exhibition includes works executed in a range of techniques, including woodcuts and linocuts, lithographs, collographs, etchings, a rare hand-colored lithograph and several hand-colored woodcuts and linocuts.

Accompanying the exhibition is a fully illustrated 120-page catalogue published by Pomegranate Communications. It includes a curatorial essay by Dr. Adrienne Childs; an essay by Ruth Fine, Curator of Special Projects in Modern Art, National Gallery of Art, Washington, D.C.; and an introduction by Deborah Willis, Professor of Art, Tisch School of Arts, New York University. The catalogue is among the very few that document the medium of printmaking by African American artists, and it is the most comprehensive exploration of Driskell’s work to date.

David C. Driskell
Born in 1931 in Eatonton, Georgia, Driskell is Distinguished Professor Emeritus at the University of Maryland, College Park. He received his Bachelor of Arts degree from Howard University in 1955 and his Master of Fine Arts degree from Catholic University in 1962. He also attended the Skowhegan School of Painting and Sculpture in Maine in 1953, and studied art history at The Hague, The Netherlands, in 1964. In 1976, Driskell curated the groundbreaking exhibition “Two Centuries of Black American Art: 1750–1950,” which laid the foundation for the field of African American art history. Since 1977, he has served as cultural advisor to Camille O. and William H. Cosby and as the curator of the Cosby Collection of Fine Arts. In a White House ceremony in 2000, Driskell received the National Humanities Medal from President Bill Clinton, and in 2007 he was elected as a National Academician by the National Academy.

A different kind of earth Walker Evans and the Picture Postcard