A different kind of earth

It’s a collection of ceramic sculptures that were first exhibited at the 48th Mostra della Ceramica di Castellamonte receiving the medal of honour by the President of the Republic of Italy, and now arrives at the MACA – Civic Museum of Contemporary Art in Acri (Cs), Italy. 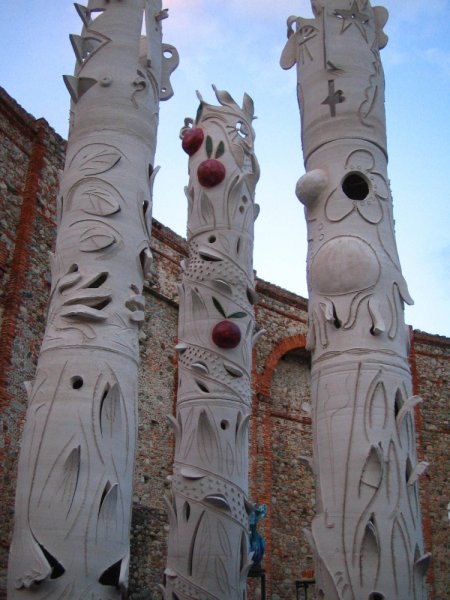 [ad#lb]
For the first time Silvio Vigliaturo – a world renowned glassfusion maestro – employs a different kind of earth, moulding it directly. Whenever he has to turn matter into art – true expression of his feelings – he uses his hands, in a creative performance which associates him closely to the image of the Creator. Sculpture is the direct spawn of a man’s hands. A man who pushes his thumb in the earth to shape and elevate it, creating new images and forms. Vigliaturo’s art – this new art conceived through the medium of ceramics – shows itself to the world through a complex and often contradictory vision, that of an unfocused superposition of a multitude of fragmentary images. This vision has to find a unifying character in the midst of its fragmentarily. Right away the vision breaks down, multiplying and contradicting itself, in its parts, creating numerous different visions. This fragmentation, these shards of image, are the object of Vigliaturo’s work, through which he gives life to “The Trojan War”, a series of artworks that stage the artist’s emotions.
Silvio Vigliaturo’s goal is to extend ceramics’ millenary tradition to the state of being contemporary, impressing innovation into the matter by means of acts which objectify themselves in artistic, spontaneous and peculiar forms that etch, carve, incise, life itself.