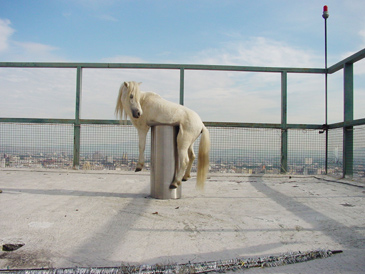 Anri Sala (born 1974, Tirana) is a leading contemporary artist whose early videos and films mined his personal experience to reflect on the social and political change taking place in his native Albania. Sala has attached a growing importance to sound, creating remarkable works in which he recasts sound’s relationship to the image. Linked to this development is Sala’s long-standing interest in performance, and particularly musical performance. A central premise of this exhibition is that most of the works presented at the Serpentine either use a live performance as their starting point or could lead to a performance in the future.

The exhibition is conceived as a cycle, or loop, structured around pairs of works that echo each other. Answer Me, 2008, was filmed in the abandoned dome of a Buckminster Fuller-designed surveillance station and uses the structure’s unique architecture to investigate the effect of space on the production of sound. The dome’s distinctive echo, triggered in the film by a man playing the drums in the large, empty space, drowns out all of the dialogue spoken by the female character, with the exception of the words that give the film its title. The drum that is ‘played’ by the dome’s echo in Answer Me appears in the first room of the exhibition as Doldrum, a snare drum activated by the inaudible low frequencies of the film’s soundtrack.

Two of Sala’s most recent films deconstruct and reconfigure a well known punk song. In Le Clash, 2010, performers play renditions of the song Should I Stay or Should I Go through a barrel organ and a music box outside a derelict concert hall in Bordeaux. While in Tlatelolco Clash, 2011, figures among the ruins of the Tlatelolco site in Mexico City randomly insert fragments of a musical score into a barrel organ, creating a disjointed version of the same song. Both films play at the same time in the exhibition; the continuous and disjointed renditions of the song echo each other across the gallery space.

Accompanying Le Clash is No Window No Cry, 2011, a window fitted with a music box that plays the same song as its counterpart in the film. Visitors are invited to play the music box, adding a further layer to the film’s soundtrack. Alongside Tlatelolco Clash, Sala presents Title Suspended (Sky Blue), 2008, a sculpture in which two gloves rotate slowly, briefly assuming the shape of a pair of complete hands once in each rotation. The rubber hands mirror the hands seen feeding the score into the barrel organ in Tlatelolco Clash, their continually collapsing form reflecting the ruptured melody of the film. For Score, 2011, the barrel organ’s score is given a different form. The perforated pattern is carved through walls covering the windows, translating sound into a different materiality and creating openings to the outside that allow the sounds of the park and the gallery to intertwine.

Long Sorrow, 2005, filmed on the eponymous public housing estate in Berlin, is an enigmatic record of a performance orchestrated by the artist. Sala invited noted free jazz musician Jemeel Moondoc to perform while suspended outside the window of an empty apartment on the eighteenth floor. For the Serpentine, Sala stages the performance 3-2-1, 2011, in which saxophonists Andre Vida and Caroline Kraabel respond live to Long Sorrow in a series of daily performances. 3-2-1 begins with one of these saxophonists accompanying an audio recording of Moondoc’s improvisation with his own earlier performance on film, resulting in a ‘trio’: the film, the audio recording and the live performance. The saxophonist at the Serpentine then plays live with Long Sorrow, a ‘duet’, before finally performing a solo after the film ends. 3-2-1 punctuates the fixed cycle of the show with an improvised element, integrating the strands of film and performance that run through Sala’s work.