In Contemporary Rhythm: The Art of Ernest L. Blumenschein 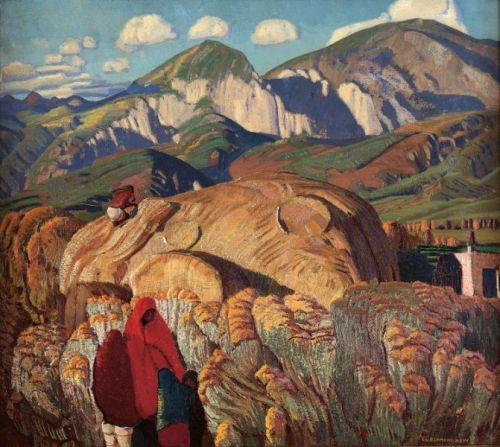 [ad#lb]
Celebrating the life and art of perhaps New Mexico’s most accomplished painter, In Contemporary Rhythm: The Art of Ernest L. Blumenschein provides a comprehensive view of the artist’s colorful and inventive works. One of the founders of the famed Taos Society of Artists, Blumenschein rocketed into the spotlight with his modernist approach to capturing the American West.
Featuring 66 pieces created in the late 19th and early 20th centuries, the show includes major paintings, sketches and illustrations. The exhibition opens November 8 at the Denver Art Museum (DAM) and continues through February 8, 2009.

“This exhibition is the largest and most comprehensive effort ever made to assemble, analyze and celebrate Blumenschein’s remarkable work,” said Peter H. Hassrick, Director of the Petrie Institute of Western American Art and co-curator of the exhibition. “It features masterworks by the artist, revealing his daring aesthetic, his proto-modernist style, his social sensitivities and his influence on regional as well as national trends in art.”

Credited as one of the champions of Western American art, Blumenschein was drawn to the
West initially by boyhood fantasies of exploration and adventure. The artist found the landscape transformative and exotic, writing soon after his arrival in Taos, “I saw whole paintings right before my eyes…
Everywhere I looked, I saw paintings perfectly organized and ready to paint.” With his inclination toward modernism, Blumenschein expressed what he saw in bold color and form using a daring color palette and sophisticated style.
Whether painting a piercing blue sky or a Pueblo Indian garbed in rainbow hues, he ignited his canvas with light and emotion.

Born in Pittsburgh, Pa., Blumenschein was raised by his father, a professional musician and director of the Dayton Philharmonic Society. After initial studies at the Art Academy of Cincinnati and Art Students League of New York, the artist attended the Académie Julian in Paris.
Following his initial formal training, he worked as a professional illustrator.

Blumenschein stumbled across Taos as the result of a fortunate accident. He was traveling with fellow artist Bert G. Phillips on a sketching trip from Denver to northern Mexico when a wheel of their carriage broke, leaving them stranded in Taos Valley. The delay gave the artists time to take in the spectacular countryside and interesting cultures of the area. They decided to stay and work in the area, founding the Taos Society of Artists to promote the splendor of Taos and the art of the American West to larger audiences. The society formed a blossoming art colony in the Taos area that continues in spirit today.

The exhibition follows Blumenschein’s life, tracking the artistic, social and political dimensions of his art. It begins with his lively illustrations and continues with early paintings of the West and his favorite subject, Pueblo Indians. As Blumenschein developed as an artist, he also developed a stance on social issues that included pictorial testimonials on the cultural integrity of the native people of Taos and respect for their lands.

A diverse offering of programs surrounds the exhibition. An adult studio class will explore painting the Southwest region, allowing participants to draw inspiration from the work of Blumenschein. Family activities include tours and an in-gallery game. A symposium about Blumenschein and Western art is planned for January as part of WinterWest, a premier Western Art celebration sponsored collaboratively with the National Western Stock Show’s Coors Western Art Exhibit & Sale.

Wells Fargo is the local presenting sponsor. Additional support is provided by The Adolph Coors Foundation Exhibition Fund, the citizens who support the Scientific and Cultural Facilities District, the Fine Arts Foundation and the generous donors to the Annual Leadership Campaign. Promotional support is provided by The Denver Post and 5280 Magazine.

The exhibition will be on view in the Gallagher Family Gallery at the Denver Art Museum from November 8, 2008 through February 8, 2009, and is included with general admission.

Paintings from the Reign of Victoria: The Royal Holloway Collection, London ItaliaArabia