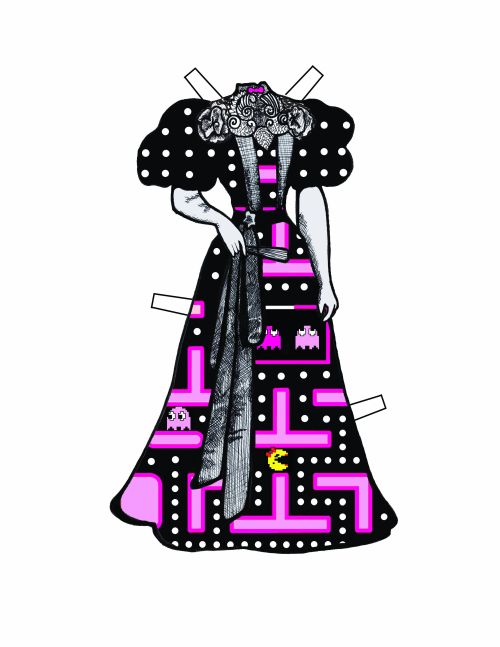 The Museum of Contemporary Art San Diego (MCASD) will present Margaret Noble: 44th and Landis at its downtown location from August 9, 2012 to January 20, 2013. As part of MCASD’s ongoing Cerca series, which highlights the work of regional artists, Noble’s mixed media installation and performance charts a psychological path through San Diego’s City Heights neighborhood, where the artist grew up.

Combining references to the neighborhood’s early Victorian history as well as to 1980s urban pop culture, Margaret Noble: 44th and Landis takes the form of an intricate sculptural environment made up of hundreds of cut paper dolls and other forms. The installation also incorporates an experiential soundtrack emanating from fourteen handmade paper speakers, and will serve as the set for a series of sound-based performances by Noble. Mixing imagery borrowed from video games, Victorian paper dolls, and 1980s hip hop culture, the work evokes the interior and exterior worlds of a child navigating the streets of an inner city gentrification. Integrating strands of memory and fantasy, and public and private histories, Margaret Noble: 44th and Landis offers insights into a San Diego neighborhood’s past and present.

Noble credits Bridget Roundtree, Ciara White, and Fab Lab as her collaborators on the exhibition, which is funded by a grant from the San Diego Foundation’s Creative Catalyst Fund. A limited-edition artist’s book of paper dolls accompanies the exhibition, and will be available at the front desk.

Noble holds a BA in philosophy from the University of California, San Diego, and an MFA in sound art from The School of the Art Institute of Chicago. Growing up in San Diego’s City Heights neighborhood, she was influenced by the beat-driven dance culture of the 1980s. She later performed as an electronic music DJ in the underground club community of Chicago for five years. Noble performs solo or in collaboration with visual artists as an experimental composer and sound designer and has been showcased in national and international dance and theatre productions. She has had residencies at the MAK museum of Vienna and Salzburg Academy of Fine Art. A recipient of the Hayward Prize and International Governor’s Grant, Noble is not only a sound artist but a storyteller who explores the industrial and sociological evolution of communities and urban spaces, weaving together text, visual mixed media, and sonic arrangements to create innovative narrative experiences.