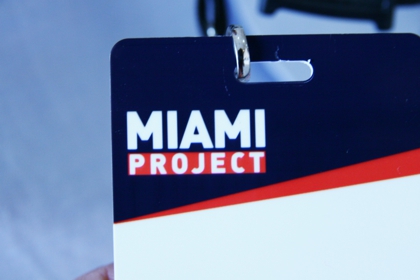 Miami Project returns in 2015 for the fourth edition, bringing the best in modern and contemporary art to the fair’s new waterfront location on Collins Avenue at 73rd Street, just blocks from the historic Deauville Beach Resort. Plans are under way for another singularly elegant environment produced with the unique attention to detail that Miami Project has become known for.

Building on past years of success, including 2014’s record attendance of over 25,000 visitors, Miami Project Edition 4 will feature 70 top galleries from around the world in a bright and airy beachside Pavilion, affording easy access to and from the Miami Beach Convention Center. Working alongside Selection Committee members Pavel Zoubok of Pavel Zoubok Gallery, Catharine Clark of Catharine Clark Gallery, and Jeffrey Lee of RYAN LEE, Miami Project will again be one of Miami’s “most highly sought out” events, securing its ground as “the most cutting-edge fair” that succeeds “without succumbing to sensationalist tendencies.”