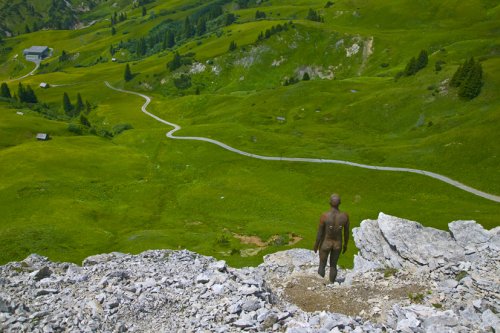 The Kunsthaus Bregenz and the British artist Antony Gormley (born in 1950) are realising a unique project in the mountains of Vorarlberg. Horizon Field will be the first art project of its kind erected in the mountains and the largest landscape intervention in Austria to date.
Horizon Field consists of 100 life-size, solid cast iron figures of the human body spread over an area of 150 square kilometers in the communities of Mellau, Schoppernau, Schröcken, Warth, Mittelberg, Lech, Klösterle, and Dalaas. The work forms a horizontal line at 2,039 meters above sea level.
This height has no specific metaphorical or thematic relevance in the placement of the statues. It is an altitude that is readily accessible but at the same time lies beyond the realm of everyday life.
According to the artist: “Horizon Field asks: Where does the human project fit within the evolution of life on this planet? The works form a field in which living bodies and active minds are involved in measuring the space and distance through the field of these static iron bodies, and of course both skiers and hikers will be part of this. This installation recognises the deep connection between social and geological territory; between landscape and memory.”
The individual sculptures will be mounted at intervals ranging from sixty meters to several kilometers, depending on the topography, looking in all directions but never facing each other. Some of the figures will be installed in places one can hike to or ski past in the winter. Others will be unapproachable, though visible from certain vantage points. The works are neither representations (statues) nor symbols, but represent the place where a human being once was, and where any human being could be.
Horizon Field engages the physical, perceptual, and imaginative responses of anyone coming within its relational field. Over the two years during which this installation will be in place, the work will be exposed to the elements, to different lighting conditions, and to the changing seasons, thus enabling constantly new perceptions and impressions.
The KUB’s Projects in the Field In the 13 years since its inception the Kunsthaus Bregenz has established
itself as one of the leading exhibition halls for contemporary art. With its exhibitions and projects it addresses current challenges in the international art scene. Moreover, its work and especially its projects in Vorarlberg
contribute strongly to promoting the cultural identity of the region.
Former field projects in Vorarlberg included Anish Kapoor (2003), Jenny Holzer (2004), Janet Cardiff (2005), and Michael Craig-Martin (2006) in the Johanniterkirche in Feldkirch, as well as Gottfried Bechtold’s work at the Silvretta Dam—Signatur 02—, which the KUB has since purchased for its collection, and the xenon projections by the American artist Jenny Holzer (2004). The latter consisted of a series of large-format texts which the artist projected onto architectural and natural monuments (e. g. the old parish church in Lech or the rock face Kanisfluh). With its idea “Inside the Work” the KUB presented itself as an institution in an international context at the Austrian Cultural Forum in New York in 2005.
The project Horizon Field is in keeping with the KUB’s series of already initiated artistic interventions in public space in Vorarlberg and at the same time represents a climax because this field of figures is being installed in one of Vorarlberg’s most beautiful landscapes.

Antony Gormley on Horizon Field
“In presenting these obdurate, earth-bound but earth-witnessing markers in space and time, the installation puts 100 industrially produced artifacts within an elemental world which is far from the contextualising influences of the museum. It asks basic questions: who are we, what are we, where do we come from and to where are we headed?
This sculptural ensemble recognizes the need for collective futures built on the models of small-scale sustainable communities such as those of the Walsers in the high Alps. The need for the radical revisioning of cultural expression within a new understanding of a homeostatic biosphere is at the heart of this project. I would confidently propose that it is important not just for the region, for Austria but for all sentient beings travelling on this planet.”

Antony Gormley, April 2010
“The whole point of this work is to make a connection between that which is palpable, perceivable, and imaginable. It’s a field of relations between mind and body in which some of the bodies are surrogates and some are real.”
“The greatest challenge that is facing human kind is whether or not the human species will participate in the evolution of life on this planet. Life has taken about 3.7 billion years to evolve from the first stromatolites to our evolved conscious life form. We have another 6 billion years left in the great generator: the sun and we have to decide whether or not we can continue work with nature. In the past culture has always identified itself as being separate from nature. This project and everything to do with it asks whether we can find our nature within nature.”
Antony Gormley in an interview for Vorarlberg Tourismus Magazin, February 2009

Project Development
In 2007, after the development of the project idea and the initial selection of the installation sites by the artist, the Kunsthaus Bregenz (under then Director Eckhard Schneider) started a campaign to inform the various groups who might be affected (communities, tourist associations, environmental protection, and landscape conservation authorities and organizations, hunters, etc.) about Horizon Field and to discuss the possible collaboration and impacts.
34 property owners, of which 12 are agricultural communities (some comprising several hundreds of shareholders), have demonstrated their extreme openness, understanding, and dedication by approving the erection of the sculptures. Horizon Field would not have been possible without such an open and constructive dialogue within this complex network of interest groups.

Biography
For more than 25 years Antony Gormley has revitalized the human image in sculpture through a radical investigation of the body as a place of memory and transformation, using his own body as subject, tool, and material. Since 1990 he has expanded his concern with the human condition to explore the collective body and the relationship between self and other in large-scale installations such as Allotment, Another Place, Critical Mass, Domain Field, and Inside Australia. His work increasingly engages with energy systems, fields and vectors, rather than mass and defined volume, as evident in Another Singularity, Blind Light, Clearing, and Firmament. Gormley’s most recently acclaimed live artwork One & Other, saw 2,400 participants representing every region of the UK each spend an hour on an empty plinth in London’s Trafalgar Square for 100 consecutive days.
Antony Gormley’s work has been exhibited extensively throughout the UK, with solo shows in venues of London such as the Whitechapel, Tate, and the Hayward Galleries, the British Museum and internationally at museums including exhibitions in the Louisiana Museum in Humlebæk, the Corcoran Gallery of Art in Washington DC, Malmö Konsthall, the Moderna Museet in Stockholm, Kunsthaus Bregenz, Austria and Antiguo Colegio de San Ildefonso, Mexico City. He has also participated in group shows at the Venice Biennale and the Documenta 8 in Kassel.
Antony Gormley was awarded the Turner Prize in 1994, the South Bank Prize for Visual Art in 1999 and was made an Order of the British Empire (OBE) in 1997. In 2007 he was awarded the Bernhard Heiliger Award for Sculpture. He is an Honorary Fellow of the Royal Institute of British Architects, Trinity College, Cambridge and Jesus College, Cambridge, and has been a Royal Academician since 2003.