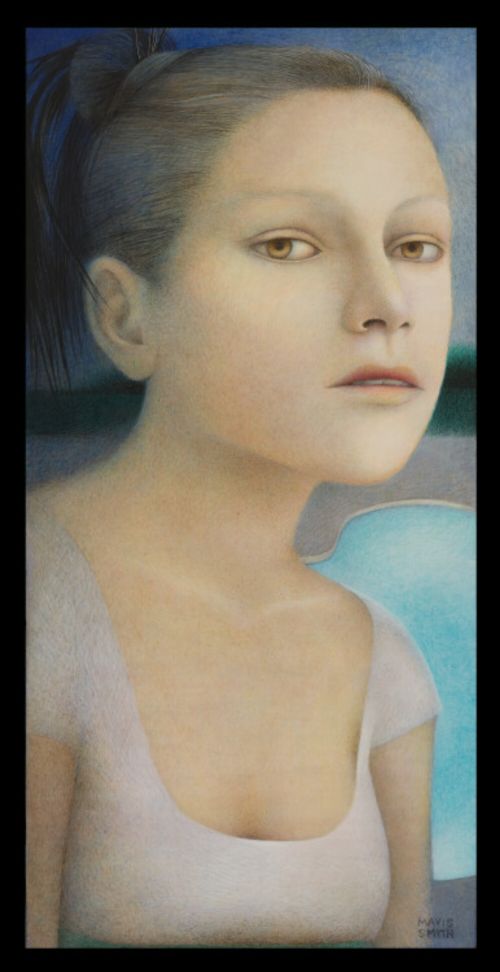 You’re strolling down a busy sidewalk, absorbed in your thoughts. Suddenly someone walking the other way glances in your direction, you glance back, and your reverie is broken. Two souls meet, briefly, then the moment passes, and without breaking stride you each walk on.

The paintings of Mavis Smith are about that moment, hinting at a narrative, yet remaining intentionally elusive. Mavis Smith: Hidden Realities will be on view at the James A. Michener Art Museum January 14 to May 20, 2012 in the Fred Beans Gallery.

Part storyteller, part portraitist and part stage director; the Bucks County resident and Trenton native creates images like single frames of a movie with no beginning and no end. Who are these mysterious figures, gazing at the world with enigmatic calm, surrounded by swimming pools, moody interiors and distant skies, portals to another world?

Smith, who earned a bachelor’s degree from Pratt Institute in 1977, says they are not of any specific place. “I am trying to create an atmosphere from my mind,” she says. Her fantasy environment is gleaned from travel, film, music and books. A career as a children’s book illustrator left her with a well-oiled imagination.

“I don’t start with a firm concept,” says Smith. “Your mind is open and you go into a trance and the ideas come in. I start out with a face or pose that intrigues me; then once I am caught up in the physical execution of the piece, other elements of the composition suggest themselves. The background elements usually evolve after I start painting.”

The faces of her subjects are porcelain-smooth, the eyes almond shaped. “I think what gives them that Botticelli quality is the medium,” says Smith, who studied egg tempera at the Seattle Academy of Fine Art in 2002. Egg tempera was used by artists as diverse as Botticelli, Vermeer and Andrew Wyeth. The resulting images seem to radiate light from within, making the people who inhabit her luminous world slightly surreal. “I’ve always been fascinated by the technique, having seen it at the Metropolitan Museum and at the Uffizi (in Florence).”

Egg tempera involves a process of building up hundreds of translucent layers. More durable than oil, egg tempera is made from powdered pigment and egg yolk mixed up fresh daily. It dries quickly, so 50 to 100 layers can be added in a day. “Each layer is pure color, and every layer affects the one beneath,” says Smith.

“Instead of an exhibition in a museum, think of this show as an archeological dig,” says the Michener’s Marguerite and Gerry Lenfest Chief Curator Brian Peterson. “As you slowly peel back the layers of earth, you start to uncover an arrowhead here, a shard of pottery there. You ask yourself, ‘Who were these people?’ The deeper you dig, the more the clues pile up, and finally what was hidden seems within reach—until another layer of earth comes into view.”

Smith has exhibited her work in Holland and Switzerland as well as Santa Fe, New York City, and at several venues in Bucks County. She has written 10 children’s books and illustrated more than 75.