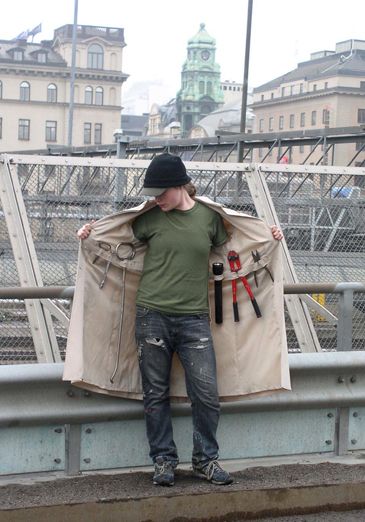 In her first major exhibition in the UK, co-produced with Moderna Museet, Stockholm, Klara Lidén will present a series of installations, both existing and new films displayed within the context of architectural interventions in the gallery spaces, as well as works on paper.

Lidén has, in earlier projects, built a house with discarded materials on the banks of a river, set up an alternative free postal system and fly-posted blank white posters over street advertisements. In her 2007 exhibition, Unheimlich Manoeuvre, she moved the entire contents of her apartment into a museum. Her short films capture the improvised performative actions that she undertakes in public urban spaces, such as Paralyzed, 2003, in which she danced provocatively on a commuter train. Her aim is to ‘divert materials or spaces from their prescribed functions, inventing ways of making these things improper again’.

Trained as an architect, Lidén has described her built structures as ‘un-building, re-cycling or improvising new uses for what’s already been set up’. Her public actions raise ‘the question of re-appropriating privatized, urban space… with the body, its ways of moving and the temporalities it engages’. Recalling a long history of performance art and conceptual work, Lidén reveals the hidden aggression and potential rebellion that rests under the surface of our cities and their inhabitants.

Using pre-existing materials and often herself as the protagonist, she plays with ideas of violence, inner tension and disaffection using simple strategies and objects readily to hand. In an attempt to de-programme our behaviour and subvert our experience of everyday life, Lidén disrupts our shared and accepted social norms with a focused, radical energy.