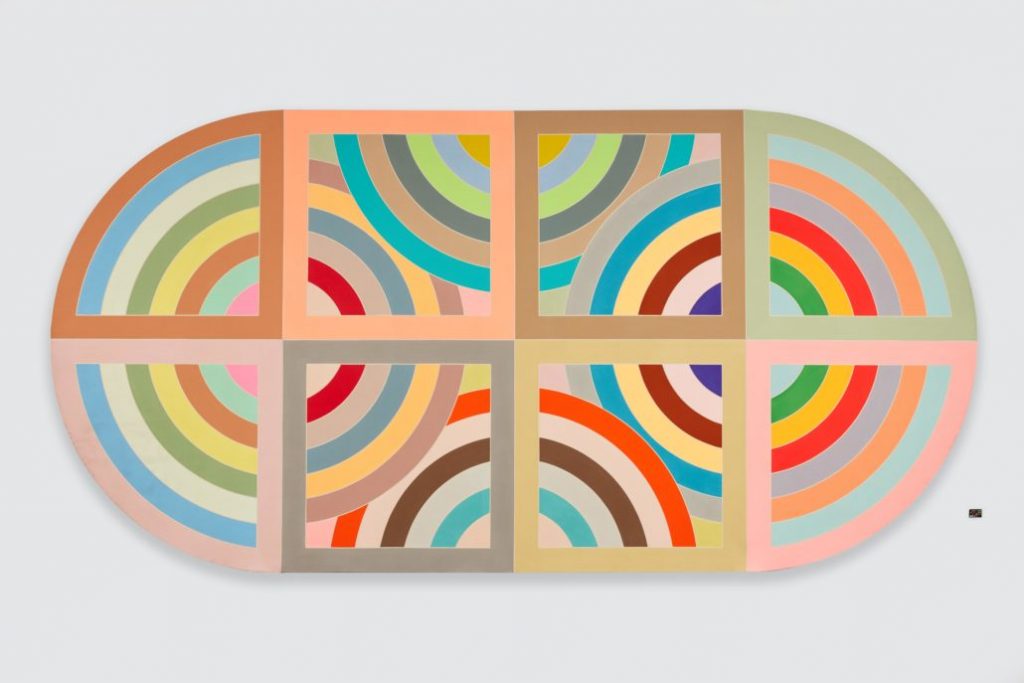 NSU Art Museum Fort Lauderdale is pleased to present Frank Stella: Experiment and Change, an exhibition that spans the artist’s 60-year career from the late 1950’s to the present. The exhibition, composed of approximately 300 paintings, relief sculpture and drawings will offer insight into his trajectory from minimalism (e.g. the geometry of the black paintings) to maximalism (eg. the spatially complex constructionist and large sculptures of the Moby Dick series.) Curated by Bonnie Clearwater, Director and Chief Curator, Experiment and Change leads the museum’s 60th anniversary celebration presented by AutoNation, and will be on view from November 12, 2017 to July 8, 2018.

The exhibition juxtaposes works from various periods of Stella’s career, revealing his aesthetic development and focusing on his “Working Archive,” which contains material never exhibited before, such as notes, sketches and maquettes that shed light on his growth as an artist. Stella’s diverse interests include art history, architecture, new materials (fluorescent pigment, carbon fiber, titanium, et al.) and computer-aided modeling for rapid prototyping. His preparatory studies show the ideas in his work that led to a notion about the enlargement of pictorial space.

Included will be penciled color sequences for the larger concentric square paintings (1973), flat foam-core cut-outs leading to the emergence of a more generous “working space” and 3D printed models from the 1990’s through the present outlining the use of digital technology.

Frank Stella (b. 1936) emerged as part of a generation of American artists excited by, driven and challenged by Abstract Expressionism. Frank Stella: Experiment and Change emphasizes the variety of expression found throughout his entire body of work. The twists and turns of Stella’s career are illuminated by insights that were discovered during the curatorial process. This exhibition elaborates on the research Clearwater began for a previous exhibition, Frank Stella at 2000: Changing the Rules, an in-depth exploration of the artist’s bold paintings, sculpture and architectural models from the 90’s.

Clearwater notes, “An initial spark of his artistic aspirations was the experience of seeing Rogier van der Weyden’s early Netherlandish Crucifixion Diptych (c. 1460) at the Philadelphia Museum of Art while an undergraduate at Princeton University. Stella said that the sheer visual impact of van der Weyden’s diptych appeared as a ready-made definition of art. Rogier’s painting became a goal for him to hope to live up to. Given the characterization of this moment I realized the necessity to remap his career to show how this painting, rather than the rules of formalist modernism, propelled his progress.

These paintings might also encourage us to speculate how Stella’s attraction to the use of shallow pictorial space and bright fluorescent pigments helped him to approach his goal, the absolute beauty of the Netherlandish masterpiece.”

One of the exhibition’s highlights is Deauville (1970) a 45-foot long canvas shaped like a thoroughbred racetrack. As an aficionado of racing of all kinds, he often imagines himself running across the canvas. “While his contemporaries Donald Judd and Dan Flavin created work that was machine-made, I see Stella as a modern day John Henry, racing against the machine, brushing paint from one end of the canvas to the other and back again, setting an admirable and competitive pace.”

For Stella, Deauville was the starting point for the exhibition design at NSU Art Museum. The shape of the elongated oblong painting complements the 83,000-square foot museum’s curved galleries designed by leading modernist architect Edward Larrabee Barnes. Architecture has played into Stella’s work throughout his career. The Irregular Polygons (1965-66) broke with the conventional rectangular format of easel painting, as did the early 1960’s notched aluminum paintings. This departure was suggested by a view of European mural painting, which noted the irregularity of the perimeter. The interruption of the imagery by windows, doorways and other architectural features generated irregular edging which in turn generated irregular and complicated surfaces. This notion coupled with illustrations from intersecting Kazmir Malevich’s planar geometry helped to establish the shaped canvas as a format in its own right, one which Stella continues to exploit.

In the exhibition, Deauville is shown adjacent to several Irregular Polygons and a large double concentric square Parodoxe sur le comediene (1974), and works from the Polish Village series (1971-74), which represent Stella’s first constructed relief paintings, his attempt to build a painting and then paint it. Among these works we find a full-scale sketch, a 12-foot cartoon for Suchowola, and a Polish Village relief, drawing attention to Stella’s leap from a flat, two-dimensional plane to the literal three-dimensional depth of these constructions.

Another project inspired by architectural space enlists Hooloomooloo paintings (early 1990’s) made for the Kawamura Museum in Japan. The entire series of these paintings will be exhibited at NSU Art Museum, creating an almost continuous frieze on the second floor, starting on a long curved wall and ending high above the atrium. The irregular shapes of these paintings were determined by the architectural space of the Japanese museum. Removed from their intended location, their arched forms and cutout shapes appear arbitrary until the viewer imagines the resulting negative space as doors, windows and arches.

“Stella believes that art offers at least the illusion of ultimate freedom. In the context of the art world, he appears fearless and indifferent to risk. Even works that initially looked like misfits to him (and others) now appear revelatory in light of his most recent pursuits,” explains Clearwater.

Frank Stella’s Experiment and Change is part of NSU Art Museum’s Regeneration Series, exhibitions designed to explore the wide-ranging impact of World War II on artists in Europe and the United States. It was launched in 2016 with Anselm Kiefer from the Hall Collection. Stella’s work is grounded in the post-war philosophical shift in which the individual was to master his/her own existence as popularized through the zeitgeist of existential philosophy, phenomenology and gestalt psychology. When Stella stated in a 1964 radio interview, “What you see is what you see,” not only was he suggesting that his compositions were nothing more than their appearance, but he was also pointing out that his work dealt with the psychology of perception and could be rephrased as, “What you see is how you comprehend what you see.”