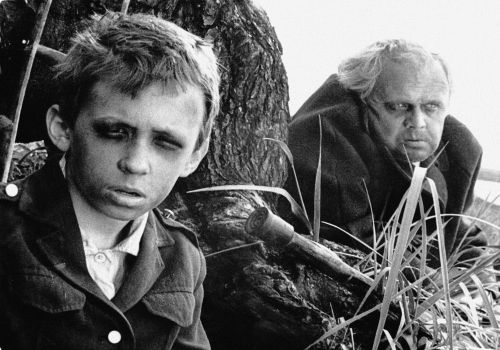 Necrorealism emerged in the early 1980s in Leningrad, founded by Evgeny Yufit, artist and independent film director. Necrorealism overturned the established Soviet concept of death as the only possible heroic ‘death in the name of Motherland’. Necrorealism was born as a social protest, full of absurdity and black humor, and based on forensic medicine textbooks. The main aesthetic theme of Necrorealism is the condition of man standing on the verge of death and demonstrating some pathology. The artists tried to represent the unthinkable — death itself. The very title contained a paradox: necro, which means death, and realism pointing to life.

The very first works produced by the group were studio photographs in ‘zombie make-up’ and impromptu performances that imitated fights and chases shot against the background of woods, abandoned construction sites, suburban trains, etc. These shootings were a start of the parallel cinema in Russia. Yufit founded the first experimental film studio ‘Mzhalalafilm’ that united independent directors and artists.

In the early 1990s, Necrorealism reaches international acclaim, and the works by group members take part in the most prominent exhibitions of Perestroika era, such as ‘In the USSR and Beyond’ (1990; Stedelijk Museum, Amsterdam), ‘Binazionale: Soviet Art around 1990’ (1991; Kunsthalle, Düsseldorf; Central House of Artists, Moscow; Israel Museum, Jerusalem), ‘Kunst Europa’ (1991; Kunstverein, Hannover), and others.

The exhibition at the Moscow Museum of Modern Art is the first full-scale retrospective of Necrorealism that allows retracing the development of this original artistic movement. The display features both well-known and new works by the artists, as well as presents the ‘necro-method’ and complete iconography of the group.