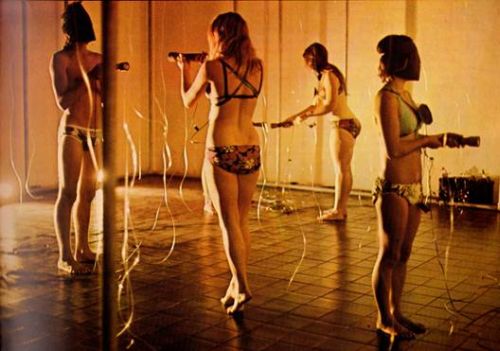 This December, the Govett-Brewster Art Gallery presents Points of Contact: Jim Allen, Len Lye, Hélio Oiticica, an exhibition that traces the connections between New Zealand artist Jim Allen, expatriate Len Lye and Brazilian artist Hélio Oiticica, one of the most innovative Latin American artists of the twentieth century and a significant figure in the development of contemporary art.

In 1968-9, while head of the sculpture department at Elam School of Art, Allen travelled to London and New York where he respectively encountered the works of Oiticica and met the filmmaker and kinetic sculptor Len Lye.

Central to this exhibition is the reconstruction of some of Allen’s works of great historical significance. The issue of reconstruction is also pivotal in the case of Lye and Oiticica, most poignantly for the latter after the tragic fire last October that destroyed the majority of his entire oeuvre. This exhibition presents Hélio Oiticica’s work for the first time in New Zealand.

Along with significant works by Lye and Oiticica, Points of Contact, reassembles for the first time the works of Allen’s seminal 1969 Small Worlds exhibition at Barry Lett Gallery in Auckland. The reconstruction of the two environments Space Plane 1969 and The Water Pillow 1969 will complete a series that were instrumental to the artist’s development, as well as to the history of post-object practices in this country. The exhibition will also feature a restaging of one of Allen’s most emblematic performances, the 1974 three-part performance Contact. It will allow a new generation to experience a major early performance piece in New Zealand art.

Points of Contact examines the connecting threads of influences of post-object art in New Zealand led by Allen, which unlike its American counterpart derived not from minimalism but kineticism, an art form focused on movement and light. ‘Points of Contact joins a number of recent international surveys that challenge the European and North American art historical paradigm, examining instead parallel and specific art historical trajectories outside these centres, in both their local and global dimensions’, says Mercedes Vicente, Curator, Contemporary Art, Govett-Brewster Art Gallery.

Gallery Director Rhana Devenport says: ‘Allen has made an important contribution to the history and development of New Zealand art through his sculptural, performative and pedagogical work. The reconstruction of these works under the artist’s direct supervision, will help ensure that Allen’s legacy is adequately cared for, documented and understood.’

The exhibition is curated by Tyler Cann and Mercedes Vicente.