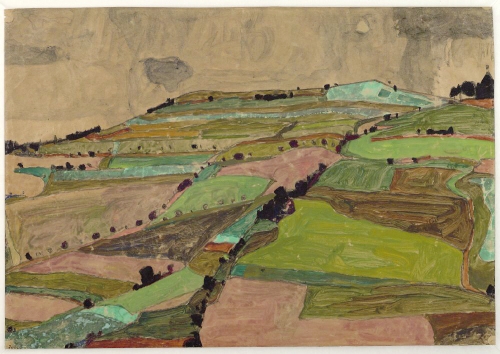 Egon Schiele is one of the most popular modernist artists, who stands like almost no other for the close relationship between an artist’s work and life. His early tragic death, his turbulent friendship with his model Wally, and the Neulengbach affair, in which he was imprisoned for twenty-four days in 1912 for allegedly seducing a minor, have all led to ongoing public interest in his private life. His best-known works have therefore often been seen in terms of this narrow focus on the autobiographical – nudes of young women showing their sex in provocative poses, and seemingly pathological self-stylisation.
This exhibition in the Kunstbau of the Lenbachhauses opens up a new perspective on the work of this expressionist artist, by for the first time addressing Schiele’s philosophical view of the world. A large selection of watercolours and drawings from the Vienna Albertina – the world’s most significant collection of Schiele’s works on paper – makes it possible to present all the fundamental themes of his art. These show Schiele’s independent stance on important debates of his time, with his interest in the crisis of the individual around 1900 a major feature.
This exhibition thus focuses on crucial aspects of Schiele’s intellectual world, going beyond grouping his works by their motifs alone. It addresses questions of identity, Schiele‘s understanding of his role as a artist, and his thoughts on processes of perception, in which the influence of Japanese coloured woodcuts – hitherto unresearched – played a key role. By contrasting works of art with excerpts from Schiele’s poetical writings, his interest in these themes in various media is made apparent, and new and unusual perspectives on his pictures are revealed. Schiele’s self-portraits, for example, must be seen as attempts to comprehend the self as variable, an aspect which the artist also considered in several poems, and which coincides with contemporary ideas of shifting identity. This is not a vain turn to one’s own psyche, but a form of sensitivity towards various external impetuses that becomes clear in Schiele’s work.
There is also an historical reason for this Egon Schiele exhibition in the Lenbachhaus. In spring 1912 the Munich gallery owner Hans Goltz organised two simultaneous exhibitions. One of these was devoted to the Blue Rider (second exhibition, Black-White), and the other to Schiele. This was his first solo show abroad.
Nearly one hundred years later the Austrian artist is again a guest in Munich, now in the Lenbachhaus, where he again is very close to the Blue Rider.