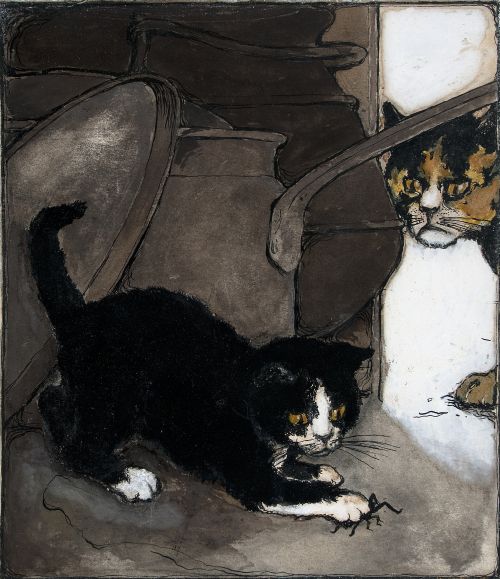 Katharine Pyle (1863 – 1938), younger sister to famed American illustrator and author Howard Pyle, spent much of her career in her older brother’s shadow. Although she worked for a time in Howard’s Wilmington studio, and even took his classes at the Drexel Institute, Katharine developed a style all her own and eventually emerged as one of Delaware’s most prolific women authors and illustrators. Tales of Folk and Fairies: The Life and Work of Katharine Pyle, on view February 18 – September 9, 2012, reintroduces 71 of Katharine’s books and illustrations to present-day audiences.

The youngest of five children, Katharine developed an early interest in writing and illustration. As a young girl she had several poems published in Atlantic Monthly and Harper’s Bazaar and, through her brother’s encouragement, studied art at the Philadelphia School of Design for Women and the Drexel Institute. Determined and self-sufficient, Katharine fought to navigate through the rapidly growing, male-dominated world of commercial illustration. She lived for brief periods in New York City and Boston but eventually returned to Wilmington. During her lifetime, Katharine wrote and/or illustrated over 50 books — most of them children’s stories with imaginative illustrations. Her material ranged from fairy tales, ancient myths, and nursery rhymes to stories about animals. Katharine is particularly well-known for illustrating an edition of Anna Sewell’s Black Beauty (1928).

Katharine’s work was stylistically influenced by Howard’s, but it also reflects an awareness of contemporary trends in illustration. Her illustrations are closely aligned with the work of Beatrix Potter, Walter Crane, and Arthur Rackham, as well as more avant-garde artists like Aubrey Beardsley. Drawing from these diverse influences, Katharine developed a unique approach that is entirely original.