Have Gags Will Travel: The Life and Times of a New York Cartoonist
Michener Art Museum, Doylestown
March 10 – July 1, 2012 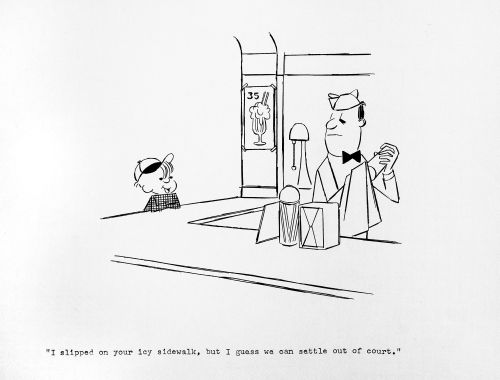 In the 1950s, Rosie the Riveter morphed into Betty Crocker, and Madison Avenue’s seductive images of happiness and contentment in the home governed women’s lives. Sylvia Getsler chose a different path.

The Michener Art Museum will take a close look at that path in Have Gags Will Travel: The Life and Times of a New York Cartoonist, on view March 10 through July 1 in the Pfundt Gallery. This exhibit is sponsored by Mary Lou and Andrew Abruzzese, The Pineville Tavern.

From The New Yorker to Boys’ Life, from lurid detective magazines to church quarterlies, the “gag” has become such a staple of American life that we rarely notice the skills that go into making them. Sylvia Getsler (1926-2009) was a rarity in the cartooning world—a highly successful female gag artist whose work was published in the Saturday Evening Post, Playboy, True Detective, McCall’s, and Ladies Home Journal.

“Every Wednesday, as a child, I went with her on her visits to the cartoon editors of various newspapers, magazines, and syndicates,” recounts her daughter, Mindy Treceno Cohen. “I watched as she offered her artwork, her humor, and her imagination, in an effort to help support our family.”

Born in Poland, Getsler emigrated to New York in 1933, and by her early 20s had begun what became a regular Wednesday ritual: traveling from her home in the Bronx to Manhattan with portfolio in hand, visiting the cartoon editors of various “syndicates” that controlled what got printed in magazines. As a free-lancer, she had to sell her gags to survive, and what often sold was a world in which every man was a skirt-chaser and an alcoholic, and every woman’s mission in life was to shop and get married.

“To make a living she sold gags that lay comfortably within the stereotypes of the day, but tempered these attitudes with a healthy dose of intellect and satire,” recounts Cohen. “These gags were her bread and butter, and were eagerly purchased by the many successful men’s magazines of the day.”

Getsler made hundreds of these gags that were published around the world, but her heart was in the wit and innocence of children. This exhibit focuses on her beautifully drawn gags of kids—kids who want to understand grown-ups but maybe never be one, kids who are wise beyond their years but constantly befuddled by the strange rituals of adulthood. “Although I treasure the memory of my mother telling me that I was sometimes her inspiration for these gags, the truth is that her own independent thinking and incredible wit made this work her most successful series,” says Cohen.

“Getsler’s insights into the world of children remain as timeless and relevant today as the day they were drawn,” says the Michener’s Marguerite and Gerry Lenfest Chief Curator Brian Peterson.

In choosing the road less traveled, Getsler was able to achieve the happiness and prosperity that often eluded the “perfect moms” of her time. She had the respect of her peers, the love of her family, and the smiles and chuckles of millions.

Getsler spent the remaining years of her life, from 2000 to 2009, in Lambertville, N.J., with her husband, artist and writer Joseph Treceno.