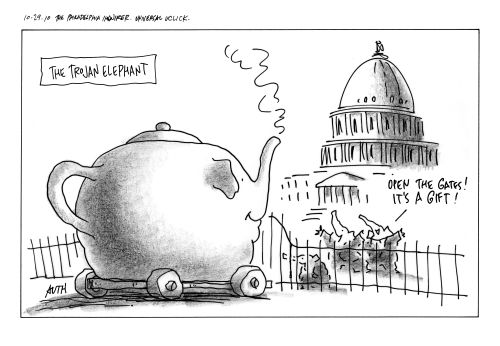 Tony Auth’s cartoons, seemingly simple and always direct, have influenced public opinion and politicians for more than 40 years. “Our job is not to amuse our readers,” Auth says of a national artistic heritage of editorial cartooning that began with Benjamin Franklin in 1754. “Our mission is to stir them, inform and inflame them.”

In this national election year, Auth will be the subject of an exhibition at the James A. Michener Art Museum, To Stir, Inform and Inflame: The Art of Tony Auth, June 2 to September 23, in the museum’s Fred Beans Gallery. This exhibit is sponsored anonymously, with additional support from Deborah & Arthur Corsini, Caroline & David Rasner and Williams & Hand, P.C.

Auth was a fledgling artist from California in 1971 when The Philadelphia Inquirer flew him in for a weeklong job interview as the paper’s editorial cartoonist, and thus began an award-winning legacy of excellence that documents the changing political and cultural landscape of our time. He won one of the paper’s first Pulitzer Prizes in 1975,and among many other awards, the Thomas Nast Prize in 2002, and the Herblock Prize in 2005.

“His perspective is that of a bemused and often angry comic historian. Irony, never a favorite form with Americans, is his meat and potatoes,” says Jules Feiffer. “He is not smug, and though he can be mean, he is never mean-spirited. Auth is a moralist and an optimist.”

Auth’s drawings make a difference in how we view the world. His cartoons tell us more than columns of newsprint in a way that we remember long after other viewpoints have faded.

“In his 41 years at the drawing table in the Editorial Board’s offices, Tony has praised, lamented and skewered the deeds of eight U.S. presidents, seven Philadelphia mayors and myriad other politicians of all persuasions,” says Chris Satullo, former editor of the Editorial Page at the Inquirer and current Executive Director of News and Civic Dialogue at WHYY. “From Watergate to Whitewater, he’s been unsparing on presidents who violated the public trust. From citizen’s band radio to ‘Survivor,’ his drawings have commented with wry wit on the fads and fancies of American culture.”

Tony Auth and his work is for anyone interested in politics, culture, cartoons, newspaper work, and the life of an illustrator in late 20th century, and early 21st century in America, comments guest curator David Leopold, who has organized exhibitions for a wide range of museums including the Library of Congress and the New York Public Library in America; and the Victoria and Albert Museum and Berlin’s Filmmuseum in Europe. “His seemingly unflappable optimism and unwillingness to bow to power give us all a voice on the issues of the day. He might not show us or our leaders at our best, but there is always his hope that we will all be better.”

This retrospective exhibition gathers together the full range of Auth’s art, including drawings, paintings, sketches and newspaper pages, as well as a selection of his award-winning children’s book illustrations. This exhibit will display more than 100 original cartoons that have touched the lives of countless newspaper readers in our region and, through syndication, all over America.

Conversations: Photography from the Bank of America Collection Sylvia Getsler