Powerful image of the face of a 2,500-year-old Egyptian mummy (Kansas City, USA)

A powerful image of the face of a 2,500-year-old Egyptian mummy at The Nelson-Atkins Museum of Art has been created by special agents/forensic artists from the federal Bureau of Alcohol, Tobacco, Firearms and Explosives (ATF), as unveiled today at the Museum. 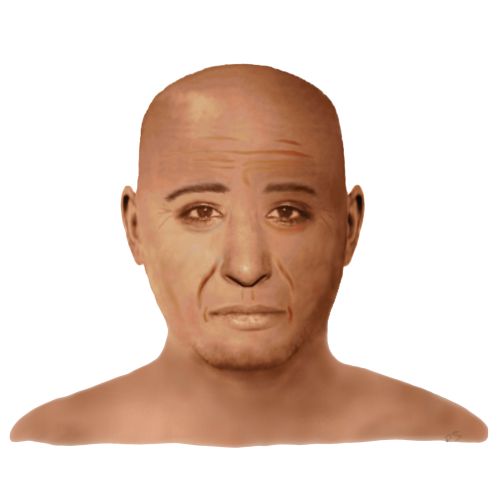 In an unusual collaboration, ATF agents worked with a Kansas City cardiologist and a Nelson-Atkins curator to scientifically analyze the physical characteristics of the mummy, named Ka-i-nefer. The mummy is part of the new Egyptian galleries that opened at the Nelson-Atkins in May.

ATF Special Agents Sharon Whitaker and Robert “Randy” Strode worked more than three months on the project, using a sophisticated computer program known as the Electronic Facial Identification Technique (EFIT) Program. The program is the most realistic and successful composite system available and specializes in facial recognition, identification and training.

“ATF’s mission involves investigating many unique and interesting criminal cases around the world,” said Kenneth Melson, deputy director of ATF. “Our forensic investigators have put their training and specialized skills together to solve another unique – and unprecedented – mystery to unravel the anonymity of a 2,500-year-old mummy. It’s an honor for ATF to be a part of this event that benefits the community and the growth of our society in a way that will have a lasting impact on future generations.”

The public will have the chance to learn about the discoveries in a special presentation 1:30 p.m. and again at 3 p.m. Sunday, Sept. 12, in the Museum’s Atkins Auditorium. The program – Face to Face with a Mummy: Unraveling an Egyptian Mystery – is free to the public, with tickets available on the Museum website, www.nelson-atkins.org.

Robert Cohon, curator of ancient art at the Nelson-Atkins, said he was delighted with the results of the ATF agents’ work and the overall analysis of the team, which yielded general information about the mummy. Through modern science, the group determined that Ka-i-nefer was a man who lived to be about 45 to 55 years old, who stood about 5 feet 5 inches and wore size 7 shoes.

“The image by ATF adds a powerful immediacy to this man who lived thousands of years ago in ancient Egypt,” Cohon said. “It is our mission at the Nelson-Atkins to engage visitors, especially children, in connecting to world cultures and great works of art, and this project greatly advances that mission.”

The scientific look at the mummy began at the prompting of Dr. Randall Thompson, a cardiologist at the Mid America Heart Institute in Kansas City, who was part of a team that examined CT scans of 20 mummies housed in the Museum of Antiquities in Cairo, Egypt. The group, including imaging experts, Egyptologists and preservationists, was looking for evidence of heart disease in the ancient Egyptians, and they found hardening of the arteries in mummies as old as 3,500 years. The results were presented in November 2009 at an American Heart Association session.

Dr. Thompson was invited to examine the CT scan and X-rays of the Nelson-Atkins mummy, and then he reached out to the ATF for its expertise in composite drawings. He also collaborated with Dr. Muhammad Al-Tohamy at the Biological Anthropology Department at the National Research Center in Cairo. They noted the mummy’s slight build, good teeth, and a painful bone infection in one of his legs.

“We are honored to have benefitted from such expertise,” said Julián Zugazagoitia, Director & CEO at the Nelson-Atkins. “This sort of marriage between science and art enhances our scholarship and encourages us to pursue future collaborations.”

Michael Sarich at MAM (Missoula, USA) Digital Art @Google: We Write This To You From The Distant Future (New York, USA)