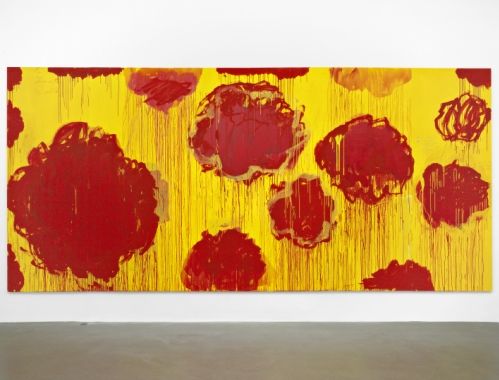 J. M. W. Turner, Claude Monet and Cy Twombly are three of the greatest painters of the last 150 years. In the autumn of 2011, Moderna Museet will bring together a groundbreaking exhibition focusing on later works by the three artists. The exhibition Turner, Monet, Twombly: Later Paintings, curated by Jeremy Lewison, is organized by Moderna Museet and will tour to Germany and the UK in 2012.

J. M. W. Turner (1775-1851) was one of the most innovative painters of the Romantic era, whose works Monet admired on his stay in London in 1871 and challenged in his later depictions of London and Venice. Cy Twombly (b 1928) has also had a lifelong interest in Turner and in the last twenty years has demonstrated a strong affinity for the work of Claude Monet (1840-1926) the founder of French Impressionism. The exhibition Turner, Monet, Twombly: Later Paintings is an unique opportunity to see these three important artists together and what unites them.

– All three artists have been considered radical in their time and met with negative comment when pushing the boundaries of the conventions of painting. Their late work has a looseness and an intensity that comes from the confidence of age, when notions of finish and completion are modified, says Jeremy Lewison, curator of the exhibition, formerly Director of Collections at Tate and now working as an independent curator.

Turner, Monet, Twombly: Later Paintings will be an exhibition that examines each artist in some depth, and will introduce their work in new ways to both new audiences and to those already familiar with the artists’ work. The exhibition will feature more than 60 works, and will examine not only the art historical links and affinities between the painters, but also the common characteristics of and motivations underlying their late style. It highlights modernity and classicism in the work of all three artists, characteristics that will emerge by their unique juxtaposition in this exhibition. In their later phases the three artists are not only preoccupied by mortality and memory but retain an interest in the Romantic outlook and the sublime.

Works by Turner will mainly be drawn from Tate’s Turner Bequest and works by Monet and Twombly will be drawn from museums and private collections across the world.

The exhibition will be accompanied by a fully illustrated catalogue published by Hatje Cantz Verlag in three language editions, with an in-depth essay by Jeremy Lewison and graphic design by Patric Leo.