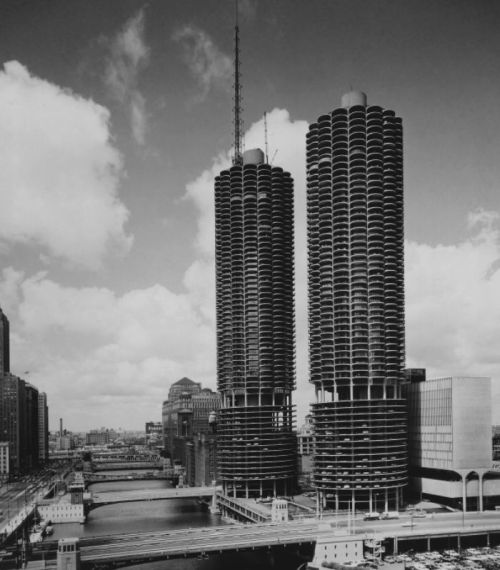 The Art Institute of Chicago has organized a landmark exhibition exploring the work of Bertrand Goldberg (1913-1997), one of the most innovative modern American architects. On view from September 17, 2011, through January 15, 2012, in the Modern Wing’s Architecture and Design Galleries (283-285), Bertrand Goldberg: Architecture of Invention is the first comprehensive retrospective of the architect’s work, featuring more than 100 original drawings, models, and photographs, as well as significant examples of his rarely-shown graphic and furniture design. Long recognized for his seminal contributions to the built environment of Chicago, most notably his groundbreaking design for Marina City (1959-67), this exhibition showcases his progressive vision, dramatic architectural forms, and inventive engineering with a wide range of built and experimental projects. As a tribute to Goldberg’s career, the Art Institute has specially commissioned a stunning installation by John Ronan Architects and graphic design firm Studio Blue.

Born in 1913 in Chicago, Goldberg began studying architecture in 1930 at Harvard College. In 1932, he moved to Germany to take courses at the Bauhaus in Dessau, before relocating to Berlin to apprentice in the office of architect Ludwig Mies van der Rohe. After his return to the United States in 1933, Goldberg worked for Chicago modernist George Fred Keck while studying engineering at the Armour Institute of Technology (now the Illinois Institute of Technology). Goldberg established his own firm in 1937 with a range of innovative work in housing and industrial design before devoting his practice to large-scale urban projects. His architectural achievements were recognized with numerous professional awards: in 1966, Goldberg was elected to the College of Fellows of the American Institute of Architects, and in 1985 he was awarded the Officier de l’Ordre des Arts et des Lettres by the French government. During his lifetime, his work served as a touchstone for a generation of international architects and critics including Reyner Banham, the Japanese Metabolist group, and members of the British architectural collective, Archigram. Today, Goldberg’s pioneering cross-disciplinary approach resonates with the diverse practices of contemporary architects and designers.

Bertrand Goldberg: Architecture of Invention draws on the important holdings of the Art Institute’s Bertrand Goldberg Collection and Archive, which includes more than 30,000 drawings and models spanning the architect’s career from the 1930s to the 1990s. This rich archival collection was given to the Art Institute in 2002 by the Goldberg family, and includes such seminal projects as Marina City, River City (1972-89), and the Health Sciences Center in Stony Brook, New York (1965-76). This work is complemented by early student Bauhaus drawings borrowed from the Harvard Art Museums and furniture from the Goldberg family’s private collection, which makes its public debut in this exhibition.

The exhibition is organized thematically, demonstrating how Goldberg’s work mirrored the changing priorities of American culture at large, beginning with his early interest in prefabrication and low-cost housing, his projects for middle class leisure culture in the 1950s, his expanded engagement with new cultural programs throughout the 1960s, and the large-scale projects for hospitals and urban planning in his later practice. Many of Goldberg’s early projects experimented with new materials and manufacturing processes, including prefabricated plywood structures and designs for mobile medical facilities for the United States government during World War II. As his work grew in scale, Goldberg explored new building technologies to realize his distinctive designs, from the daring structures of the Marina City towers and Raymond Hilliard Center (1963-66), to the groundbreaking cantilever of his Prentice Women’s Hospital (1969-74). He worked tirelessly to redefine conventional building and urban typologies and pioneered some of the first mixed-use developments in the United States at a time when American cities were facing serious problems of population and commercial development. The university and hospital buildings of his mature career demonstrate his interest in improving the quality of education and health care through new spatial configurations designed to function as close-knit “villages” promoting healing and social exchange.

From his experimental roots at the Bauhaus to his visionary designs for urbanism, Bertrand Goldberg’s 50-year-long career reflects a remarkable engagement with issues central to his time developed through a unique approach to structure and form that defied architectural convention. His steadfast commitment to innovation across a multitude of disciplines, including architecture, urban planning, and graphic and industrial design, mirrors the fluid exchange that occurs between these fields today, as practitioners venture beyond the confines of their specializations to provide solutions that transform our social and built environment.