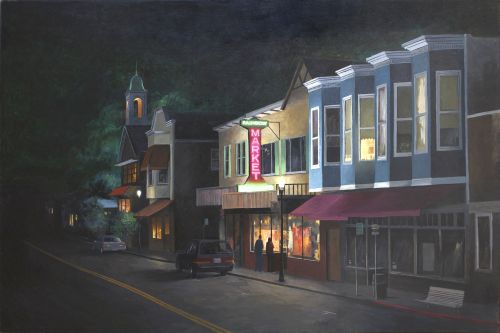 Exploring and illuminating one of America’s most fabled regions, Gallery Bergelli is pleased to present Iconic Marin: Paintings by Bryn Craig. Opening September 23, with the gallery reception from 6-8pm, the exhibition continues through October 19, 2011.

Only a handful of counties in America enjoy name recognition, evoking a landscape, a history, or a way of life that goes beyond its borders. Northern California’s Marin County is one of them, and longtime Marin resident Bryn Craig never has to look far for inspiration. Yet while most artists gravitate to Marin’s pastoral, sun-dappled hills, Craig’s eye for detail stretches from the marquee of a Larkspur movie theater, to a tree shrouded view of Bolinas Lagoon.

A respected realist whose works place the viewer in the moment, Craig insists he is not a photo realist. “I’m not interested in the snapshot. I try to include much more than just the surface of a place. I want to express my emotions about the subject and to stimulate emotions in the viewer.”

For local residents, Iconic Marin engages both an appreciation and curiosity for the place they call home. A familiar landmark like Mt. Tamalpais reveals an unexpected beauty from an unusual angle, while a half-lit country inn, the edge of a neon sign, or a barren coastal landscape test the viewer’s Marin memory. A downtown nightscape captures Gallery Bergelli itself.

For those unfamiliar with the region, Craig’s richly expressive oil paintings provide a compelling tour. While no one has yet declared a Marin school of painting, Iconic Marin: Paintings by Bryn Craig offers a definitive look at an artist influenced by his surroundings.

“I’m interested in finding the poetry and beauty in even the most ordinary places and things.” says Craig. “Having seen all angles of Marin in all seasons, over many years, these scenes are personal to me. Put together, it tells a story.”

Born in Pennsylvania in 1931, Craig developed a passion for painting from his earliest years. He studied at the Philadelphia Museum College of Art and spent summers at the Art Students League in New York. His work has been shown in exhibitions at the Philadelphia Museum as well as the Corcoran Gallery in Washington D.C. He has received numerous awards and has been featured in American Artist magazine.