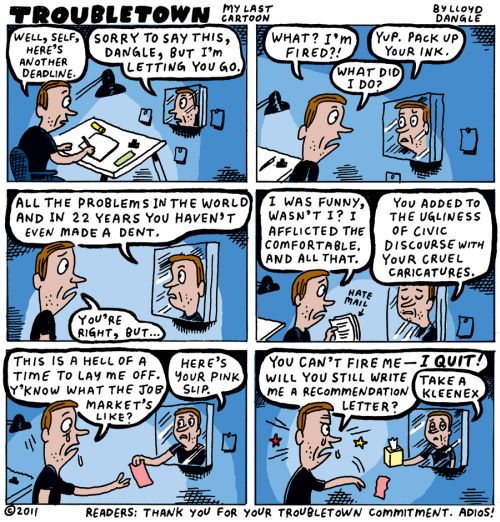 For over 22 years, cartoonist Lloyd Dangle entertained, educated, and occasionally outraged audiences worldwide through his weekly comic strip Troubletown. Dangle retired the feature in April 2011, and the Cartoon Art Museum is pleased to present Last Stop: Troubletown, a comprehensive retrospective featuring the first and last Troubletown strips—and 22 years of highlights in between.

Lloyd Dangle grew up in Michigan and, after attending the University of Michigan school of art, tossed his BFA out the window to draw cartoons for Michael Moore’s muckraking newspaper the Michigan Voice.

He moved to New York City during the go-go 80’s and worked for magazines, including the Village Voice which was in its heyday. Dangle landed a cartoon feature at upscale Manhattan, Inc. Magazine, lampooning the high living antics of Wall Street’s youthful elite (some things are timeless). After landlord larceny caused Dangle’s apartment building to literally collapse, he moved to San Francisco and earned his underground hipster cred, befriending Robert and Aline Crumb and appearing in their classic depressive übercomic, Weirdo.

Dangle is an multi-disciplined writer, designer, and artist whose works, over the past 20 years, have appeared in over 100 magazines and newspapers of every type, from the crusty corporate mainstream, to the altruistic not-for-profit, to the loftiest academic journals, to the bleeding, subcommercial gutter. He is now universally regarded as a big-money marketing genius for his branding of Airborne, the world’s number one cold remedy, and one of the fastest selling products in retail history (according to Airborne’s own data). His weekly comic strip, Troubletown, was first published in the San Francisco Bay Guardian in 1988 and has grown to become a widely-syndicated cartoon feature in alternative newsweeklies and lefty political magazines. He has published several books and exhibited his work in the United States and abroad.

Lloyd Dangle lives in Oakland, California with his wife, the powerfully-successful and attractive graphic designer and fine artist, Hae Yuon Kim, and their handsome and overachieving son, Oscar.