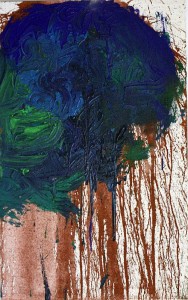 Marc Straus presents its first solo exhibition of work by Hermann Nitsch from September 9 to October 18, 2015. The exhibition will feature 17 paintings by Nitsch, one of Austria’s most important artists, from his distinguished 55-year career.

Nitsch’s (b. 1938) paintings are created during his bold ritualistic performances, which call on all five senses to address the intensification of human existence and reveal deep universal truths. Recalling the anthropometric records of Yves Klein or the shamanistic displays of Jackson Pollock, he explores the human body as a vehicle for his paintings, recording the corporeal existence of the performance’s participants–the hysterical shuffle of dance, a smear or a bloody mark. Nitsch’s paintings bring to life a decree by Austrian philosopher, Ludwig Wittgenstein, that “The human body is the best picture of the human soul.” The paintings are beautiful abstractions symbolizing what it means to be human. They are graceful violent palimpsest, full of vitality but also quiet for contemplation, representing a life of originality, courage and dissidence.

Nitsch’s performances are interpretations of pagan ceremonies during which he becomes the conductor and balances his premeditated Aktions (actions) with spontaneous incidents, culminating in a complete dissolution of restraints—a catharsis—from its participants. Nitsch intensifies complex themes such as creativity, politics, capitalism, innocence, sex, violence, and even questions animal cruelty. With more than 100 performances to date—the most prominent one being “The Orgien Mysterien Theater”—these staged Dionysian performances are replete with religious sacrifices, mock crucifixion, blood, entrails, robes, dance and nude participants.

This is not art of blasphemy or malevolence towards the Church. Quite the contrary; Nitsch venerates Christianity whose history is charged with symbols and ceremonies of sacrifice, and whose origins assumed some pagan ritual. Nor is this art that disregards animals; Nitsch does not sacrifice live animals, a fact not understood by his critics. He uses animal cadavers that have been slaughtered professionally for meat. That his performances and work at times engenders such strong protest is understandable – Nitsch’s art is certainly unsettling and both unyielding and revealing. It is fearless and necessary.