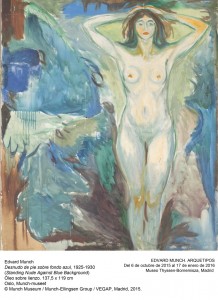 The Museo Thyssen-Bornemisza is hosting Edvard Munch. Archetypes, the first exhibition to be held on the Norwegian artist in Madrid since 1984. Organised with the generous collaboration of the Munch-Museet in Oslo, the show brings together a selection of eighty works by the artist, who is hailed today as one of the fathers of modern art along with Cézanne, Van Gogh and Gauguin.
The latest publications and most recent exhibitions have succeeded in freeing Munch of many of the stereotypes to which he has been subjected in order to show him not only as a universal symbol of the anguish and alienation of the modern man but, above all, as a key creator in shaping contemporary artistic sensitivity. Curated by Paloma Alarcó and Jon-Ove Steinaug, Edvard Munch. Archetypes aims to follow the same path, focusing on the most unknown aspects of his creative force and ability to synthesise contemporary man’s obsessions.
Although Munch never abandoned figurative art, he broke away from the visible world and explored the hidden spiritual dimension of reality in order to immortalise the most universal themes of life, love and death through an innovative artistic language that evolved from symbolism to expressionism.
Closely linked to the literary and artistic circles of his day throughout his lifetime, Edvard Munch contributed with his oeuvre to the advancement of modernity that took place in all areas of European culture in the late nineteenth century, together with prominent figures such as Norwegian dramatist Henrik Ibsen, Swedish writer August Strindberg and German philosopher Friedrich Nietzsche.
Much’s art stems from a particular mixture of artistic traditions, progressive literary trends and esoteric speculations – not to mention Nordic myths – with which he creates a modern mythology with a determined experimental approach ‘against the current of the modern style’, as he stated. Using archetypes, primeval images of human behaviours, Munch succeeds in establishing multiple relations between the external signs of the physical world and the most hidden spiritual dimension.
Existential obsessions such as love, desire, angst, jealously, illness or death, and moods such as melancholy, loneliness or submission are shown in his work through the bodily attitude of the figures, who are paralysed in a sort of static tension at the precise moment when their gesture expresses the feeling they are intended to represent, and also determine the setting or spatial treatment of the composition. The flat, sinuous forms, symbolic colour, expressive distortion of the body and the use of experimental engraving textures and techniques are also essential elements of his artistic vocabulary.