German art from Kiefer to Henning 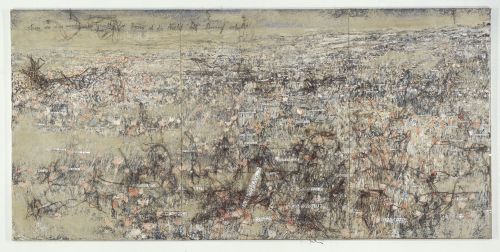 This summer, Museum Boijmans Van Beuningen will be exhibiting the enormous painting ‘Wohin wir uns wenden im Gewitter der Rosen, ist die Nacht mit Dornen erhellt’ (1998) by Anselm Kiefer. This piece is almost 4 metres high and 8 metres long and is being shown as part of the exhibition ‘The collection. German art from Kiefer to Henning’ which offers a cross section of German painting from the museum’s own collection, supplemented with several important works that are on long-term loan to the museum.

‘Wohin wir uns wenden im Gewitter der Rosen, ist die Nacht mit Dornen erhellt’ (1998) by Anselm Kiefer is from the De Heus-Zomer collection and has been donated to the museum as a long-term loan. Other pieces in the exhibition by a younger generation, namely by Anton Henning, Neo Rauch, Eberhard Havekost and Thomas Scheibitz have also been presented to the museum by private collectors as long-term loans. ‘The collection. German art from Kiefer to Henning’ not only gives an impression of the strong painting tradition in Germany, but also shows how the museum’s own collection can be enriched with pieces from private collections. Museum Boijmans van Beuningen will be exhibiting some twentyfive paintings plus a number of sculptures.

German painting in the museum collection
Museum Boijmans Van Beuningen can boast an interesting selection of German art, mainly paintings. Important acquisitions in this area were made during the period that Wim Beeren was director. From his appointment in 1978, he concentrated largely on work by American artists, but also carefully followed European trends. For example, he invited the German artist Joseph Beuys to take part in a public debate in the museum and subsequently purchased his enormous installation entitled ‘Grund’.

Beeren appointed designer and collector Martin Visser as head curator for modern and contemporary art. Visser carefully followed the developments in the area of new expressive painting in Germany (and farther afield) and between 1978 and 1983 acquired many important paintings. Some of these are on show in this exhibition, including works by A.R. Penck, Sigmar Polke, Markus Lüpertz, Jörg Immendorff and Georg Baselitz. Works by the second generation of the so-called ‘Neue Wilde’ are also well represented in the collection including pieces by Walter Dahn, Jiri Dokoupil and Milan Kunc. These artists produce expressive paintings, often making use of classic German themes and symbols. This renewed interest in painting allowed the re-emergence of great stories and saw the return of the artist’s personal signature.
Towards the end of the ‘eighties there was rather a lot of interest in German artists. In 1989, a solo exhibition of works by Isa Genzken and Gerhard Richter was staged by the museum.
Later, various works were purchased for the collection, not only by Genzken and Richter, but also by Günther Förg. A selection is included in this exhibition.

A new generation of German painters
In recent years, Museum Boijmans Van Beuningen has paid slightly less attention to German painting. For example, there are no works from the Neue Leipziger Schule in the collection, except for a solitary painting by Sebastian Gögel. In this exhibition, this work, together with a recent acquisition of a work by Peter Feiler, will be on show together with long-term loans from private collections. This new generation of German artists approaches painting with a new zeal and occupies a willfully unique position, making full use of the possibilities offered by painting, both in technique and subject, whether abstract or figurative.