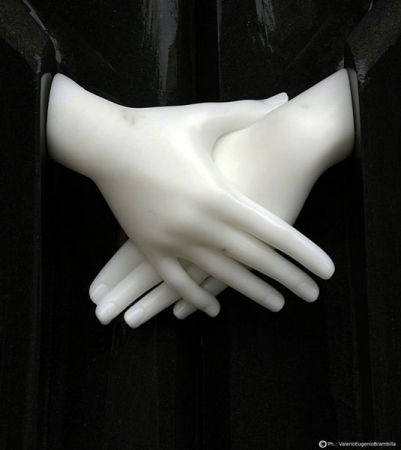 The Moscow Museum of Modern Art presents FASCINANS AND TREMENDUM, an exhibition of artworks by Aidan Salakhova. It is the largest-ever display of the artist’s oeuvre. Most of the works were created in the last three years and are displayed in public for the first time. Several artworks were shown at the 54th Venice Biennale in 2011.

The exhibition at the Moscow Museum of Modern Art on Gogolevsky Boulevard, 10, comprises three groups of artworks in compliance with the concept of the artist and the exhibition’s curator. The groups correspond with three visual and thematic constituents: the Body, the Hands, and the Objects. Three thematic groups revolve around the image of «femininity», a centerpiece of Aidan’s oeuvre. The groups make it possible for the viewer to see historical continuity in the works of the artist who seems to be building a bridge between the convenient and contemporary techniques and themes in art. There is an associative environment, the one that is «familiar» to the viewer in Aidan’s works. The environment is shaped for the viewer to get rid of a potential aloofness before plunging into a different art reality, a different dimension. According to the artist, the use of this approach draws together FASCINANS AND TREMENDUM and a theatre show.

The artist works in a large variety of mediums and visual styles. That variety highlights an apparent link between Aidan’s works and both the Western and Eastern art traditions. Raising the issues pertinent to modern models of perception, Aidan has set a female figure wearing hijab in Carrara marble and captured it on digital video as well (Before the Face of God from the series Destination, 2010-2011). The perfect contours of antique statues can be seen in her sculptures while her drawings and paintings bring to mind a narrative complexity of the Orthodox Church icons and a poetic descriptiveness of Persian miniatures (the series Persian Miniatures, 2008).

The works displayed at the exhibition include videos, paintings, and graphics, some of them are simple drawings in pencil whereas others look rather intricate. All of the above are meant to make the viewer put special attention to the characteristically «female» objects and attributes: a black veil, graceful hands, gestures, and coquettishness. Female identity in Aidan’s artworks is both concealed and evident, it is fragile and yet endowed with inexhaustible might, it can exert allure and it can frighten at the same time. Being enchanted (Fascinas) by a female body while looking at it (Tremendum) with fear — it is the very clash that lies at the heart of the concept of Aidan Salakhova’s exhibition at the Moscow Museum of Modern Art.