May 9–Aug. 2 George Segal: Street Scenes comes to The Nelson-Atkins Museum of Art.
The exhibition was organized by the Madison Museum of Contemporary Art. 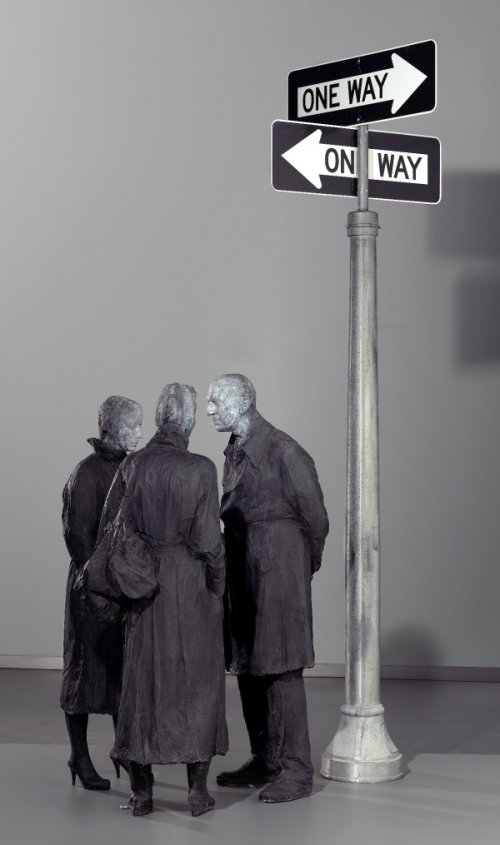 [ad#lb]
More than one dozen life-size sculptures by one of the most important American artists of the 20th century will go on view May 9–Aug. 2 when George Segal: Street Scenes comes to The Nelson-Atkins Museum of Art. The exhibition was organized by the Madison Museum of Contemporary Art.

Initially a painter, Segal’s career changed in the early 1960s when he began using plaster to create life-size figures, which he grouped with objects from the everyday environment.

Leesa Fanning, Associate Curator, Modern & Contemporary Art at the Nelson-Atkins, who is the venue curator, said the Bloch Building’s featured exhibition space–with its asymmetrical galleries, soaring ceilings and curving walls–provided a dramatic setting for the exhibition.

“Segal’s full-scale, theatrical vignettes are populated by life-size figures. Visitors encounter Segal’s human surrogates set within striking juxtapositions of light and dark, mass and void, symmetry and asymmetry. Segal said that his real work was about setting up a physical space to enter, and here, art and architecture unite to create a potentially transformative experience. An astute observer of human nature, Segal used the figure as his expressive vehicle. He chose ordinary human beings with no great pretentions and used gesture, pose, and the relation of one figure to another to suggest psychological states,” Fanning said.

Among the works displayed will be the unique plaster-cast version of the sculpture Chance Meeting, a recent gift of Carroll Janis and Donna Seldin Janis in honor of the Nelson-Atkins’ 75th Anniversary. That initiative’s goal is to add 75 important works of art to the Museum’s collection during the 75th anniversary year. The Segal was among 11 new acquisitions unveiled at the Museum’s 75th birthday party December 11, 2008. The bronze version of Chance Meeting also is part of the loan exhibition. The work is representative of how Segal imagined people moving about on city streets in what he called a “hypnotic dream state.”

“Segal’s subjects appear lost in thought and isolated, even in the midst of others. In spite of their shared humanity and presumed desire for meaningful connection, they convey the alienation of city life,” Fanning said.

The Nelson-Atkins has two other Segal works, one of which, Rush Hour, is installed in the Kansas City Sculpture Park on the plaza level between the Bloch Building and the Museum’s original 1933 building.

Accompanying the exhibition are photographs taken of Segal and his work process by photographer friend and assistant Donald Lokuta.

This exhibition is supported by the Campbell-Calvin Fund and Elizabeth C. Bonner Charitable Trust for exhibitions. Midwest Airlines is the official airline sponsor.